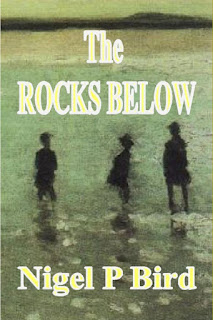 I have a new work out.

It's 20,000 words long and it's a slight diversion for me in terms of theme and style (or at least I felt it was at the outset - now I'm not so sure).

The theme of the piece is probably where the difference lies.  Here's the blurb:

"When Sam hears that the storms along Scotland's east coast, there's only one thing he wants to do - catch the surf. Missing out is not an option. Taking his board out to sea is full of risk.

The storms are even heavier than Sam and he doesn't escape unscathed. Nor do the local towns and beaches which are left battered, damaged and covered in the detritus of the sea, including some rather strange looking rocks the likes of which nobody has ever seen before.

It becomes clear that the local councils will need help in tidying up and the Surfers Against Sewage step forward to restore normality.

In the storm's aftermath, however, there are some unusual happenings occur.

First of all, there are the missing dogs, followed closely by the disappearence of some young children who were last seen playing on the sand. Not to mention the unusual noises that have been keeping people awake at night.

Talk on the streets of Dunbar is that it's Black Agnes returned to take revenge. Others fear environmental catastrophe. Still more cite ancient visions of the end of the world.

The Rocks Below is a tale suitable for adults, young adults and older children. It contains a subtle yet powerful message relating to environmental issues.

Fusing elements of crime fiction, science fiction and adventure stories, this is a book that entertains and stimulates thought in one exciting read."

As you'll see, it's slightly out there.  I can explain...

With all my work, I've had to wait for the idea to come.  The muse.  She came to me after brutal storms on our East Coast and not long after the New York disaster towards the end of last year.

These changes in weather patterns might well be part of some global cycle, but I fear they're more to do with how we live than anything else.  That got me thinking about environmental issues.

Just after I had the bare bones of the idea, I was chatting to a friend who explained to me the potential of a number of fracking sites to obtain energy from underground are likely to open up in the near future.  The range of reasons to go against this method of obtaining energy seems massive and I can only see money as a motivation for going ahead with such craziness.  What a gamble they're taking.

My story now incorporates a strong anti-fracking message. I'm hoping that it will find it's way into the hands of a lot of readers and in some small way might make a difference.

It hopefully stands strong as a story and as a tool for encouraging thought.
Here's the author's note:

I hope you’ve enjoyed this novella.


If you have, it’s in no small part due to Sam and Martin who have offered great support and advice in relation to surfing, crosswords and the locality.  I’d like to thank them here for that help in the knowledge that the story is much more real because of them.


If you haven’t enjoyed it, I’m blaming Sam and Martin.


Other than being entertained by the story, I hope that you’ve come away from it thinking about a range of environmental issues, not least the ways in which the exploitation of energy resources is potentially damaging to the world.  I’m not an expert, but it all seems rather dangerous to me and gambling with such things doesn’t seem to make any sense at all.


Maybe you’d like to look into Fracking and decide for yourself – it’s not a simple subject, but one that might be important to you or to your children some day.


Should you decide that you’re not so happy that it goes ahead, why not check out the social media sites and find out what you can do about it?  I’m not advocating revolution here, just the possibility of like-minded individuals might come together and becoming all the stronger for it.


My marching days seem to be over.  That said I still have a pair of boots to walk in and might just dust them off one of these days.  The last time I took to the streets was for the Stop The War protest in London when around a million protestors turned out.  It may not have changed what happened, but there was a feeling that it almost did; regardless, I’m glad I went.


Now my protest, or my statement, seems better made through writing.


Here’s hoping it made a difference.
You can pick up a copy via these links: US and UK.
You can also pick up some of my short stories for free via
The Shadows Of Death (US)
and
Beat On The Brat (and other stories) (US)
Thanks.
Posted by Nigel Bird at 16:51