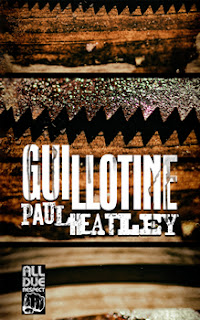 I was fortunate enough to be asked to edit this for All Due Respect and, as can happen when a book is written with high quality and significant emotional stakes, it really was a labour of love.

Lou-Lou has finally broken free of her father, local gangster Big Bobby Joe. He's a scary guy with a twisted mind and a thirst for violence. Losing Lou-Lou is itself a blow, but the fact that she's eloping with her black boyfriend adds a further dimension that means no stone is going to be unturned in order to get her back.

Bobby Joe puts out a bounty on the couple and the lowlife of the area crawl out of the woodwork to try and earn a buck. Among them is drug snorter Tommy who arranges to meet with Mikey, the Guillotine of the title. Mikey's trademark is serving up heads on platters and Tommy reckons he knows just how they can team up a and split Joe's sixty-thousand dollars.

Mikey's not interested in the deal. He carries a small torch for Lou-Lou himself and they'd have made a good fit if they'd managed to stick together when they first hit it off.

The story unfolds to become increasingly claustrophobic. Lou-Lou's hope turns into desperate defiance, Mikey's disengagement with the world is put on hold, Tommy takes things further than he could ever have imagined and Big Bobby Joe simply gets meaner and more spiteful the more we get to know him.

The storyline is strong and nicely plotted, adding tension gradually while never losing sight of the motivations of the key characters. There's plenty of action to keep things moving, yet there are also some great introspective set-pieces where the exploration of fear and pain is fully mined.

Guillotine's sharp and exciting as well as being moving and powerful. I recommend this as compelling noir that's definitely a cut above.

One Man's Opinion: ONE SMALL SACRIFICE by HILARY DAVIDSON 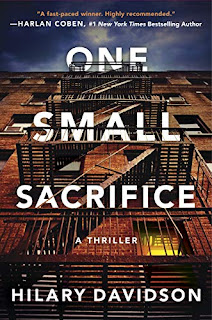 ‘The way Sheryn Sterling was feeling, it might not have been the best idea to put a knife in her hand.’

Sheryn Sterling has a new working partner and an old grudge. The partner is Rafael Mendoza, the grudge Alex Traynor.

Traynor is a photojournalist who is doing his best to cope with life on the civilian streets of New York. His previous work in a number of war zones has left him scarred. He’s suffering from PTSD and has struggled on and off with self-medication. Sterling’s beef with him is that she believes he is responsible for the death of Cori Stanton who fell from the roof of his building a year before the story is set. When his current girlfriend, Dr Emily Teare, goes missing, Sterling fears that history is repeating itself and goes out hell-for-leather to pin Traynor down once and for all. When she finds blood on the carpet of Traynor’s house, she’s quick to add the numbers together and the book is well-written enough to have us unsure as to whether two and two will equal three, four or five.

Traynor is confused. Following a PTSD episode, he returns home to find a strange woman in his apartment and making a break for it through the window to the fire escape. He’s quick on his feet and manages to prevent her from leaving. She can’t explain her presence, nor is she able to tell him where Emily is. Whatever her reason, things don’t look right and Traynor realises that Emily is in some kind of trouble.

There are two key strands to this novel. In the first, we follow Traynor as he attempts to find Emily. In the second, Sterling is attempting to nail Traynor before he can harm anyone else. The unfolding of each element is paced nicely and each compliments the other in a way that builds the tension and continually twists and turns along the uneven path of the who-did-what-to-whom-and-why?

There’s a real web of mystery here. There are whiffs of suspicion about everyone we meet. Nobody is quite who they seem at first glance and the ambiguity keeps us on our toes. We can’t be sure about anything that happened on the night Cori died as Traynor was too high to remember. There are dodgy goings on with prescriptions. The superintendent of the building has his own reasons to play his cards close to his chest. Traynor’s lawyer needs to know enough information to help the situation, but not too much to jeopardise his client’s freedom. Cori’s father is unhinged and determined that the law finds justice for his daughter’s death. Sterling realises her own motivations may be clouding her judgement. Friend Will Sipher is still dabbling with drugs and is able to keep a cool head even when the chips are down. And Emily? You’ll just have to read the book to find out.

Davidson does a really nice job of keeping everything just out of focus. At the point at which things begin to sharpen a new dimension opens up and clouds things over once more. It’s a little like wiping the mist from a mirror in a steamy bathroom; for a while you can see your face and then the moment’s gone.

Throughout One Small Sacrifice (US), you'll grab hold of one red-herring while risking losing your grip on another and it's likely all your theories will be in tatters by the end.