One Man's Opinion: HE WHO HESITATES by ED McBAIN 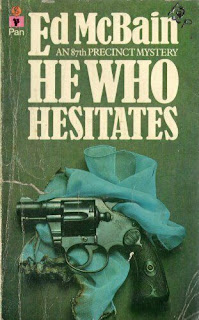 Something of a novelty in 87th Precinct terms, the police are merely part of the backdrop rather than driving cases forward.

Roger Broome's a big man. His visit to the city has been successful and he's sold all of the bowls and furniture he brought in from home. His mother's pleased with the result and he's ready to return, but something's not quite right.

He chats to his landlady for a while and meets a beautiful woman working in a nearby drugstore. He buys the former a Valentine's Day card and the asks the latter to take the day off work in order to go out with him on a date.

All the while, there's something in the back of his mind that won't let him rest. It's pricking his conscience and sees him hanging out outside the police station trying to work out whether he's ready to go in an report whatever passed the night before, the story of which is slowly revealed during reflective and/or obsessive moments throughout his day.

The main police action takes place when his landlady reports a stolen fridge and Broome is interviewed as a possible suspect, but there's also a meeting with Parker who's in a bad mood and a little bit of stalking of Steve Carella. Their presence is so light that it's barely an 87th novel at all. Instead, it stands strongly by itself and adds a great new dimension to the series.

Essentially, we're inside the mind of the criminal here. It's a position that has worked very successfully in a number of books and does so again during this one. The structure and balance between past and present creates significant engagement and the final outcome is expected and unexpected in equal measure.

I imagine this isn't for everyone, but I really enjoyed it on the whole. The only reservations I have relate to the language of race, though there is balance between the couple in their burgeoning inter-racial relationship.

Definitely one worth taking the time for and great to see McBain mixing things up a little, no doubt to stretch himself and prevent things becoming stale.