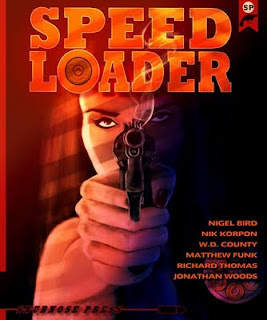 The first thing I need to do here is to declare some self-interest. I've written one of the stories in this book. I have a huge respect for the publishers and I love short fiction. I want Speedloader to sell in huge numbers.

With that out of the way, I'd like to offer my opinion of this collection.

The opening story is my own.  It’s a tale set in World
War 1 and the years of its aftermath.  The intention
of the story was to look at the large scale crimes and
the individual stories of the war in a compare and
contrast kind of way.  I hope I managed to achieve
some of that.

WD County was billed as a newcomer on the
Speedloader Press release.  If I hadn’t seen him in
the list of email addresses or read his bio, I’d have
sworn it was some big-time author writing under a
pseudonym.  Some big time author like Stephen King,
perhaps.  His story blew me away.  Apparently he’s
working on a debut novel called ‘Sammi and the
Therapist’ and I can tell you now that I’m at the head
of the queue for getting hold of a copy.


WD touches on a subject that is a taboo to many.  A
group of boys is held captive by a couple of sick
individuals who use them for sex, entertainment and
profit.  The author deals with the whole thing
masterfully, not flinching from the horror of what
takes place yet introducing a subtlety that keeps it
entirely in focus from start to finish.  The ‘Plastic
Soldiers’ title refers to the platoon the main
character, one of the young hostages, keeps in his
pocket.  To help him through the ordeal, his mind has
turned the soldiers into living, breathing and talking
entities who shore up his courage and remind him of
his responsibilities.

There’s something of the structure of the work that
had me thinking of Tim O’Brien’s ‘The Things They
Carried’.  That could just be me being fanciful, but I
really think it’s a piece of writing that is to be admired
for a hatful of reasons.

Read it here and you’ll be able to say you were on at
the ground floor.

Matthew C Funk is anything but a newcomer.  He’s
impressed me with everything I’ve seen from him to
date. No surprise that I was bowled over by his work.
‘Cuffs’ is a marvellous piece of storytelling.  Driver,

happy man, is pulled over by a cop.  The cop’s a

crazed lune  - for a while he seems so spectral I

thought we might be in ghost story territory.  It

begins badly for our driver.  It gets worse.  It’s the

kind of dark tale that would grace any campfire and,

having read this and ‘Plastic Soldiers’ I was beginning

to wonder how on earth I got into the anthology at


The next night, having recovered from the exhaustion
of such quality reads, I continued with Nik Corpon’s
Mori Obscura.  Surely there was going to be a dip in
quality somewhere.


I should have known better.

‘Mori Obscura’ is another tale that has the edge of horror to it, yet
it’s entirely human and touching.

Our protagonist is a photographer for ‘The Sun’ doing some
undercover work in a boarded up slum house where junkies shoot-
up and pass their lives away.  Thing is our main man is also an ex-
addict.  The smells and sights are those from Heaven and Hell and
as he ventures into this micro-world, he is to be faces with a
decision he’s not going to find easy to make.  Loved it.  I felt like I
was actually there on the scene, in need of a shower and a scrubbing brush.  It feels dingy and low and the photographer’s emotions are all too easy to understand.

‘Herniated Roots’ by Richard Thomas.  What can I say, the man’s a
genius (where did Snubnose find so many in the one go?).


This one rang a little too true for me at times.  I’ve not had a drink
for 6 years.  Neither has Michael.

Michael’s been getting on with his life without alcohol by going
through the motions of work and sleep.  Needless to say, it feels to
him like he’s had something cut out from him, his heart perhaps or
whatever it was that made him who he was.


It’s Michael’s shell that we meet as he shops in a local
supermarket.  He’s approached by a woman.  Nothing in her basked
suggests danger, the body lotion, avocados, banana, olive oil, dark
chocolate and small honey bear.  Maybe the snake tattoo around her wrist should have been a warning.  As you can imagine, there’s a sexual chemistry between them and it leads to a dilemma for our
alcoholic.  Should he follow his instincts and leave well alone or
dive in head-first and find an organ transplant for whatever it was
way back when. This one starts gently, but pressure is gradually applied until it starts to hurt.  Shades of ‘Leaving Las Vegas’ and more touches of brilliance.

One more story to go, I was ready for a rest.

Instead I went on.

It’s set around the Amer-Mex Anti-Drug Taskforce Southwest
(DRAMA) as they make war on Mexican cartels.  The story is
divided into sixteen sections which come together outrageously to
form a glorious whole.

As I read this I had the feeling that there was something familiar
about the voice.  I ran through it and played with it like a
connoisseur might do in trying to identify a fine wine.  I have
neither the breadth of experience or the memory to be able to do
that, but I can point at the flavours I think I caught – Kurt
Vonnegut, Joseph Heller, Gabriel Garcia Marquez played at 45
instead of 33 (reaching) and something European (who knows?).

It’s a terrific work, weaving lives together like a master of the
tweed.

Throw in a cover that has me purring and it has to be 5 stars.
There’s no choice.  You’ll not be disappointed by any of these and
for the 99c price you’re getting a lot of talent on the cheap.
A final word for the editors.  To put such a varied, consistently excellent collection such as this together, you deserve a round of applause.  Can't wait for your next publication.  And thanks for having me.