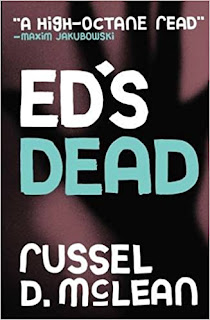 The last thing I expected to happen when I had lots of time on my hands is that my concentration would fragment so much that focussing on stories would be difficult to manage. And it hasn’t just been the concentration either - the will to pick up a book also faded during the early days of lockdown. I’ve had a similar experience with writing, but at least over the Easter holiday I managed to find the self-discipline to sit and type and my next novel is beginning to take shape.

My problem with reading made choice of book quite tricky. Anything too dark was out of the question – there’s enough bleakness out there (and in here) already – and I wasn’t in the mood for anything too light and entertaining.


In the end, I think I made a wise choice when I plumped for Russel D McLean’s Ed’s Dead (US).


I first came across this one at a Noir At The Bar in Edinburgh (more on this later) when he read an early chapter that had me looking forward to buying a copy on publication. I did just that, but because it was on my kindle, it became camouflaged in that virtual bookshelf as so many titles do. When struggling something to find a lockdown-friendly read, this seemed ideal.


Jen Carter, our protagonist, hasn’t lived up to any of her ideas about herself. She’s prone to settling for the easy option. Instead of writing her novel, she’s selling the books of others; instead of having a loving and responsible boyfriend, she’s got Ed; and instead of dumping him for good, she kills him.

True, the murder isn’t premeditated, but that’s beside the point. She has a body on her hands and has no idea what to do with it.


Enter Ed’s flatmate. He knows exactly how to handle the situation. Not just with the corpse, but the bag of cash and the huge stash of drugs. He enters like an overweight, less attractive Harvey Keitel, ready to clean up the mess and improve his own life in the process.


Neither Jen nor Ed’s flatmate have heard of the adage if it seems too good to be true, it probably is. The drugs and money haven’t dropped from heaven. Ed had siphoned them off from the last of the city’s old-school gangsters. Needless to say, he wants to get his hands on what’s his and will stop at nothing to accomplish his goal.


The only positive that’s going to come from what unfolds before us is that Jen finally finds something she’s really good at: murder.


From the outset, this one’s lots of fun. Ed’s death sets of a chain reaction that blows Jen’s ordinary life to smithereens. She’s being chased by the police and some seriously twisted lowlifes and finds herself stuck between a rock, a hard place and psychopath. She finds inner strength she never knew she had and has to be quick witted and ready for anything just to survive.


The escapade is tense, exciting and underpinned with a dark humour that adds texture and shade to the developments. The characters feel very real as does the build-up of the nightmare. McLean does a great job of creating cliff-hanger endings for each chapter which accelerates the pace at every step, and the gripping action and ever-rising stakes keep this enjoyable throughout.

Perfect for the current situation and likely perfect for a future date when things settle down for us all.
It's not a book that will have you asking lots of questions about your life or the meaning of it all, which is absolutely fine by me. Sometimes you've just got to sit back and enjoy the ride and you know you can relax when RDM's in the driving seat.


And I mentioned Noir At The Bar earlier on. They’re planning some quality events to help you keep your spirits up and you can sign in for updates here.

New From Paul D Brazill (you know you want to) 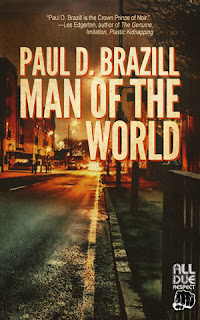 Ageing hit-man Tommy Bennett left London and returned to his hometown of Seatown, hoping for respite from the ghosts of the violent past that haunted him. However, things don’t go to plan and trouble and violence soon follow Tommy to Seatown. Tommy is soon embroiled in Seatown’s underworld and his hopes of a peaceful retirement are dashed. Tommy deliberates whether or not to leave Seatown and return to London. Or even leave Great Britain altogether. So, he heads back to London where violence and mayhem await him.Man of the World is a violent and darkly comic slice of Brit Grit noir.Praise for the Books by Paul D. Brazill:“If you took Ken Bruen’s candor, the best of Elmore Leonard’s dialogues, sprinkled in some Irvine Welsh, and dragged it all through the dirtiest ditch in South London, the result will be something akin to Brazill’s writing.” —Gabino Iglesias, author of Zero Saints and Gutmouth, for The Last Laugh“A broad range of cultural strands come together in the melting pot and form a delicious stew of criminal adventure… The observations are sharp and the characters create small nuclear explosions as they collide with each other.” —Nigel Bird, author of Southsiders, for The Last Laugh“Brazill offers a series of amusing episodes filled with breezy banter in this offbeat slice of British noir.” —Publishers Weekly, for Last Year’s Man“It’s all here, everything you’ve come to expect from a Paul D. Brazill caper—the fast pace, the witty banter, the grim humour and the classic tunes—except this time he’s REALLY outdone himself. Unlike the lament in the song the title takes its name from, Paul’s best years are surely still ahead of him.” —Paul Heatley, author of Fatboy, for Last Year’s Man“Paul D. Brazill is the Crown Prince of Noir. That’s my opinion, granted, but I stand by it. For those who require proof, just pick up his latest novel, Last Year’s Man, and it will be clear why I make that statement. All hail the crown prince!” —Les Edgerton, author of The Genuine, Imitation, Plastic Kidnapping, Just Like That and others“Brazill is brilliant, a unique voice which stands out from the crowd.” —Keith Nixon, author of the Solomon Gray books, for Last Year’s Man
MAN OF THE WORLD by Paul D. Brazill — Published by All Due Respect, an imprint of Down & Out Books (April 2020)
• Amazon — Trade Paperback | eBook• Amazon UK — Trade Paperback | eBook• Barnes & Noble — Trade Paperback | eBook• IndieBound — Trade Paperback• iTunes — eBook• Kobo — eBook• Play — eBook 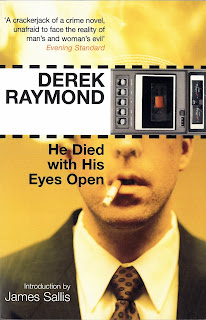 A wonderful read that will have you wondering about the human condition as much trying to put the pieces of the puzzle together. Superb.
Posted by Nigel Bird at 14:07 No comments: