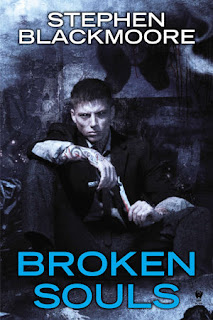 I didn’t know a lot of magic back then. Enough to get into trouble, not enough to get back out again.


Necromancer Eric Carter has lost everything and gained a wife in the form of Santa Muerte, the patron saint of death.


He returns to LA to meet up with Harvey Kettleman, a fellow mage and a powerful one at that, there’s every chance that Carter will be able to gather enough information to set his life on the right path once again. Unfortunately, Kettleman turns out to be someone else entirely – an entity wearing the skin of the mage and seems to want Carter dead. The only thing that saves our protagonist is the appearance of his dead best friend, Alex. The warning comes just in time and a tremendous battle ensues.


All this leaves Carter in a difficult position. Someone wants to kill him, but that someone can take on the form of anyone he happens to cut the skin from. There’s no one he can really trust. And then there’s Alex, not quite ghost and possibly a figment of Carter’s imagination. What the hell is he doing turning up to help the man that put a bullet in his head?


Things get messier when a woman with a Russian accent attacks Carter on the train and worse when he enlists the help of the Bruja, a vampire-saving mage who lives on Skid row. Not to mention the strange sense that Carter’s powers are evolving and strengthening in a way that he doesn’t understand.

His only form of defence is to go on the attack, and when Carter is involved anything could happen.


Broken Souls (US) is a lot of fun. There’s plenty of explosive action as Carter paints himself into a not-to-pleasant corner and the balance between the fantasy world and the real one is handled extremely well. There’s a hard-boiled flavour to the whole thing which has just the right infusion of humour to entertain and enough investigation to engage fans of the Private Investigator. It pumps up the volume full blast until the eardrums eventually have to burst. Great stuff.