One Man's Opinion: LET'S HEAR IT FOR THE DEAF MAN by ED McBAIN 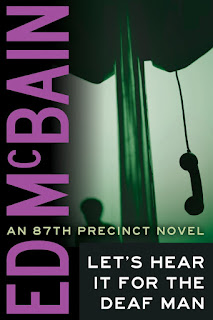 “The juices were beginning to flow, and nowhere did they flow as exuberantly as in the 87th, where life and death sometimes got a little bit confused and where the flowing juices were all too often a bright red.”

The more books I read about the 87th Precinct, the more I find myself enjoying them.

This was my second Deaf Man story. The fact that I’m going in the wrong order makes not a bit of difference.

Let’s Hear It For The Deaf Man (US) has a similar structure to Eight Black Horses. There’s the totally engaging plotting of the Deaf Man himself, a strand relating to a series of cat-burglaries that have taken place on the same block over a short space of time and there’s been the crucifixion of an unidentified man.

Each of the strands is compelling. They’re written in ways that build up elements of tension and heighten curiosity. They also allow further exploration into the lives of the main detectives and their partners. In this one, Detective Kling is totally bowled over by Augusta Blair (‘He had never seen a more beautiful woman in his life.’), one of the victims of a break-in to her apartment where the burglar has left a kitten by way of identifying himself.

This one covers lots of bases. It’s got something for the fan of the whodunit, for those who like their crime brutal, for anyone who enjoys dark humour, for readers who enjoy the perfectly formed quip and for people who appreciate well-rounded characters who give more than two dimensions.

Super stuff and I look forward to the next one.

If you’ve got any solid tips on your own particular faves, I’d love to hear them – there are so many to choose from. Maybe I should just go for book one and take it from there. 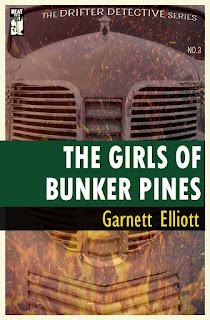 This one’s for fans of detective fiction, particularly those who hanker after work from a golden age. A really strong novella.
Posted by Nigel Bird at 14:41 No comments:

One Man's Opinion: WHEN THE MUSIC'S OVER by AIDAN THORN 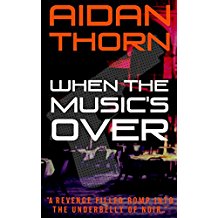 WhenThe Music’s Over (US) is a tale set in Birmingham’s gangland. It has good guys turning bad, bad guys staying bad and an ex-enforcer who comes out of retirement and isn’t sure which way to turn.

Harry Weir is a nasty piece of work. He’s a drug dealer who has become mean and complacent. He’s also the son of one of the bosses of Birmingham’s biggest crime syndicate. He meets his end at the hands of Benny Gower at the story's opening. Benny then steals from his bosses before doing a good job of covering his tracks with a move to Southampton.

Enter Wynn McDonald. Wynn’s an old-time crook with a big reputation. He is called up by gangsters Castle and Weir to track down Harry’s killer and to locate the cash that has disappeared. Wynn would be happy to stay away from his old business, but his ties are strong and his loyalties clear. As he investigates Benny, however, his feelings begin to change. No one has a bad word to say about Benny Gower and everyone seems to be rooting for the guy.

Wynn’s good at his job and soon has leads on Benny. The only thing he’s not sure of is how he’s going to clean up the situation at hand. A glimpse into Benny’s past life as a rock star and new information about the real reason his band never made the big time only serve to muddy the waters as Wynn becomes increasingly torn between doing the right thing and staying true to his past.

The ingredients of the story work well the ending is very satisfying. The characters are well-drawn and the setting is nicely created. To my mind, keeping the focus in the moment and tightening the prose a little could have added even more to the power and pace the work generates.

Overall, a fun and rewarding visit into dark territories. Definitely one for the list for fans of things Brit Grit.
Posted by Nigel Bird at 14:18 No comments: 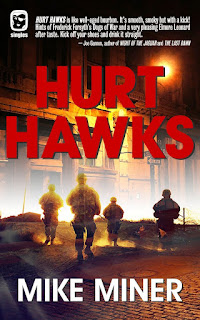 “Saddam wasn’t a Bond villain. He was a thug in a white suit. He didn’t want to blow up the world. Just to pick its pockets.”

Chris Rogers is a war veteran. He sits in his wheelchair waiting for someone to come. When that someone arrives, he’s going to kill him.

This opening to Hurt Hawks (US) is full of power. It shows off many of Miner’s outstanding qualities. The guy seems to have sixth and seventh senses. He is able to perceive the world through the physical being of his characters and the shadows they create. This ability offers a dimension to his work that is rare. The prose becomes poetic at times and he mingles a dream-like quality to concrete events. In this way, he gets deep under the skin and paints a world of many layers in a way that I really enjoy.

What follows in this tale is a world of war, survival and revenge. People do what they have to do in response to loyalties and codes that aren’t always in their own best interest. In many of the situations created it would be so much easier to walk away. For Captain Patrick Donovan and his crew, this option isn’t even on the table. They are set on paying back Chris Rogers and his family for services rendered and they’ll stop at nothing until all debts are paid.

The main thread of the story, that of the war vets coming together to fight new battles on home soil, is gripping. Outcomes are never predictable. Surprises are thrown in from many unseen angles.  I loved it. If there’s any issue with the book for me, it is that I was so hooked into this central plot that tearing me away from it to open doors to the back-story proved problematic. The past is an essential aspect of the work, yet I might have preferred a more direct telling. It’s a minor issue, though, and wouldn’t prevent me from heartily recommending this as a read.

Miner has produced some amazing fiction to date. I suspect that there is plenty still to come and I, for one, intend to be there to watch this talent unfold.

Recommended.
Posted by Nigel Bird at 07:35 No comments: