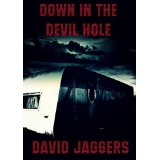 What was the impetus for writing this collection of short stories?
For the last couple of years, I have been toying with the idea for a collection of stories that could be read as stand-alone fiction, but were interconnected in a way that reveals a whole narrative world. Down in the Devil Hole (US) is my attempt at that.

How would you describe the kind of characters that populate this collection?
Well, these folks are rural southerners and rough around the edges for sure. Some could be considered white trash criminals, but I would like to think that there are some honest, salt of the earth types sprinkled in for good measure.

What message if any would you hope the reader takes away from this work?
Provided that it is written well enough to pull the reader in and get them involved, I would hope that they find their own meaning. My own take away is that there is darkness just under the surface in any town or burg you travel through, and if you look hard enough, you’ll find some twisted shit.

What is your writing process like?
Imagine a medieval torture device…no just kidding, I don’t put myself under much pressure to write. When the ideas come, I put them down in a rough form and polish from there. If they don’t come, I do something else for a while. I’m a lazy writer I guess. When I do get a viable idea, I would say I spend the most amount of time trying to find the voice for the piece. Once that is established, the rest is pretty straight forward. Finding the tone and voice is the hardest part for me.

Why write crime fiction?
I am fascinated with the concept of choice and how it affects our lives. Through crime fiction, I can explore how bad choices lead to catastrophic consequences in people’s lives. I can watch a poor bastard come unraveled and spiral into self-destruction from the comfort of my desk chair. That kind of thing is fun to me. I’m a sick puppy.

Who are your literary heroes?
There are so many. The top two would be Jim Thompson for his ability to craft cold blooded killers out of seemingly ordinary people, and Elmore Leonard because his dialogue leaps off the page. There is a long list of indie writers who inform and inspire my work and I won’t take the time to list them all here, but a few standouts would be Todd Robinson for his use of humor, that guy is funny. Angel Colon for his unique, colorful characters and Paul Brazill for the pacing and witty banter he injects into his dialogue. Again there are so many, and I find it very exciting that the genre has so many talented voices that are still up and coming and ready to take it to the next level. 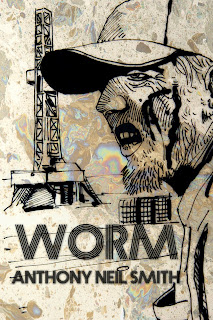 That Was Then, This Is Now by SE Hinton also knocked me for six. I’m not in the habit of re-reading books, but this is one I was happy to return to and will pull it down from my shelf again one day if I can.
Posted by Nigel Bird at 13:33 2 comments:

One Man's Opinion: KILL ME QUICK by PAUL D BRAZILL 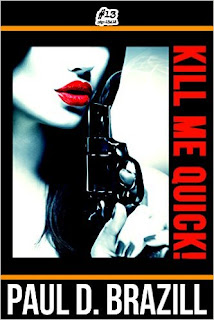 ‘Nostalgia's not what it used to be.’
Paul D Brazill has a new release from Number Thirteen Press. The author and publisher have some things in common:  they have both become a feature of my reading; they’re both engaging and enjoyable; and they both exist in the darker shades of the literary palette.
In the opening chapter of Kill Me Quick (US), Mark Hammond is a bass player. By the end of it, his playing days are over on account of his hand being smashed by thugs.
He returns to his home in Seatown, a place in decline that comes to life at night with its seedy monster of a club scene that’s populated by grotesques.
Mark indulges himself to excess and tries his best to drink the bars dry. As you might imagine, it’s not long before he’s tangled up in murder and mayhem. He discovers the body of the leader of a local biker gang and things spiral out of control.
The story winds tight as Hammond’s life unravels. There are encounters with mobsters, drug-dealers, bikers, lap-dancers, right-wing nutters and an annoying American tourist to enjoy. Brazill uses his trademark wordplay and humour to add extra layers to the experience and manages to draw out laughs from the most uncomfortable situations.
There’s also a vast soundtrack to accompany the tale. If I were to select a song to sum up this novella, Sex and Drugs and Rock and Roll would be my pick and, if they’re elements you enjoy in your noir, this is the book for you.
I'm going to get in early with my suggestion for the sequel. I see an alcoholic doctor repairing Hammond and maybe knocking off a few old-folk for their money. I propose the title Kill Me Quack. I hope that tickles Mr B's fancy.
Another thing writer and publisher have in common, by the way, is that they're both worthy of your support. Both have pulled more than their fair share of the load withing the crime-writing community. This one will be released on the 13th, but is available now for pre-order for the enticing cost of 99p ($1.50 in the US). Why not give them the Christmas treat they deserve and send this one on it's way up the charts? It's a win-win.
Terrific fun.
Posted by Nigel Bird at 18:55 12 comments: