One Man's Opinion: THE IRON WILL OF SHOESHINE CATS by HESH KESTIN

Schools are open for business again. I’m back in the classroom and my children are about to begin their routines again.


I’ve had a lovely summer. Among other things, trips to Italy, Ireland and Preston offered a broad range of experience and allowed a good deal of reading time. I’ll have a string of reviews to post when I find my blogging legs again.


There’s been a good deal happening of late.


All Due Respect announced a string of exciting publications for the months ahead and it’s well worth checking out their announcement here. Just to add a little more sweetness to their news, you can still get a free copy of All Due Respect Issue 2 for your kindle. I suspect it’s the last day on this one, so don’t delay.


I’m also chuffed to see that Kate Horsley’s novel which is a sequel to Mary Shelley’s Frankenstein. It’s called The Monster’s Wife and I’m expecting find that it’s utterly brilliant. If nothing else, go over and check out the cover. It’s certainly original and I’m still undecided about whether I love or hate the thing.


I managed to read a couple of Gerard Brennan’s titles while I was away. They’re both great reads. It’s great to see that he now has a new one published by the amazing Blasted Heath that’s available for pre-order (I’ve booked my copy). It’s called Undercover: A Cormac Kelly Thriller and you can get yours by following the link. While you’re there, check out another Blasted Heath pre-order from Anonymous-9, a follow up to the excellent Hard Bite called Bite Harder.
As if that wasn't enough, you can also get a free kindle copy of Anthony Neil Smith's 'All The Young Warriors', a real 5 star book that always seems to be topical these days.


Last but not least, you can get yourself a free copy of Beat On The Brat (and other stories) today if you so wish.


And so to the review. My thoughts on The Iron Will Of Shoeshine Cats by Hesh Kestin.


Russell Newhouse is a clever student of literature who earns a little cash working for the Brooklyn Jewish Men’s Society back in 1963. It’s a quiet, occasional job that suits him just fine. Quiet, that is, until the day the gangster Shushan ‘Shoeshine’ Cats enters the hall one day.


‘The figure...was one of those small men native to Brooklyn who appeared to have been boiled down from someone twice the size, the kind who when the doctor tries to give an injection the needle bends...If you cut off his fists he would go after you with the stumps of his arms; cut off his legs and he would wriggle like a snake and bite into your femoral artery until you died and he drowned in the blood. Even the Italian gangsters stayed away.’


Cats is an amazing character. He’s a mobster with a huge heart and a sharp tongue. He lifts Russell (Russy) from his life and takes him into his own world for the period of Cats’ wife’s funeral and beyond.


From that point, Russy tells the story of a short period of time into which an enormous amount is packed.


There's the complicated and fragile eco-system of the various territories of the time. He falls for Cats’ sister, big time. He takes a kicking from some overly-protective Irish brothers. He’s seen as Shoeshine’s protégé and thus becomes the centre of attention for the police and the FBI. There are stories about Korea and there’s plenty of politics, including a line that works right through the assassination of JFK. Before long, Russy’s leading the mob and is appearing on the front-pages of the newspapers.


It’s a dense tale and there were times that it took a little effort to stick with it for me, particularly the sections related to literature – these guys are so well-read it’s humbling.


Overall, though, I thoroughly enjoyed the book.


For me the real strength is in the sharp description and the acidic, quick-fire wit that’s in evidence throughout. It really focuses things and gives a wonderful sense of the people involved, the time and the place. As Russy’s world becomes more absurd, the plot twists around him like a python and it’s not clear until the end just why he’s been chosen for his role or whether he can emerge from all of this unscathed.


A very satisfying and entertaining read. 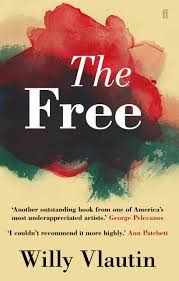 
I don’t get to author events as much as I used to, but this was a reminder of why I should get myself back into gear and check out more. There’s nothing quite like it.
Posted by Nigel Bird at 14:50 1 comment: