One Man's Opinion: TROOPER DOWN by ANTHONY NEIL SMITH 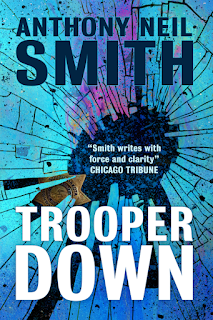 Following authors is a great passtime and ANS is someone I've admired for many years. He's a class act, that's for certain, and I've loved most of the books I've read of his.

Trooper Down is something of an exception. Perhaps I'm getting old and in need of brighter landscapes these days.

Essentially there are a couple of things that stopped me fully engaging with the novel.

The first is the protagonist. I'm used to unlikeable characters, but this one has no redeemable features. I didn't want to root for him and, in the end, that proved to be problematic for me.

My second issue was with the voice. The story is narrated by the protagonist and, as part of his journey, there's a brain injury caused by a gunshot that means he's not always in tip-top shape. This was always going to make the story-telling complex and ANS has a good stab at it, but for me the self-correction and the tangents just got in the way.

I'll be back for more Smith, there's no doubt about it and I wouldn't deliberately put off anyone from giving this a try- just be warned, it's dark and jolting and a little bit different.