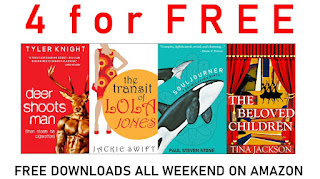 Here's what they're saying, and they're worth listening to...

First off, we’re running one of our EPIC AMAZON PROMOTIONS - we published debuts novels in December 2020 and frankly they got swept away by the Christmas rush. These 4 books are some of the best debuts we’ve ever read and we’ve decided to circle around again and promote them as if they’re brand new books - so for a starter ALL FOUR OF THEM ARE FREE ON AMAZON this weekend."

The whole of their message is here.

Here's one for fans of the hard-boiled hero who like their protagonist to be caught up in something big. This one will tick all your boxes and then some.

Told in the first person by a reaper, Ramsay Cames, we know the setup and the energy force that will drive the story from the first few pages.

This one has snappy everything: dialogue, set-pieces, one-liners, character descriptions and action. It's sharp as hell and grips like it's hanging on for dear life. Fine brushes are used where many a writer would choose the broader option and that has the effect of ramping up the energy and pace to make it speed by. For a fairly short piece of work, it feels like you've been on one hell of a journey by the end and, should you be hooked at that point, book two is waiting for you from wherever you picked up book one.

“You got 24 hours to live.”That’s all he knows. Doesn’t know the how or the why— just the when.Ram’s a process server, a reaper, for the Death Notification Agency—the DNA—which is now the biggest government organization in the world thanks to a mysterious and highly-guarded technology that can determine the time of anyone's demise, right down to the minute.That’s where Ram comes in. It’s his job as a reaper to deliver death notices to soon-to-be-deceased citizens 24 hours before they give up the ghost. That’s it. Nothing complex about it. He’s assigned to District 598.4A. Hollywood. Not that one. The other one, in Florida—his own sunny armpit of the world.And life ain’t that bad for Ram. Besides a wrecked marriage and kids that barely talk to him, Ram floats through his days letting people know when their life’s about to go belly up, then heads to Nasty Nate’s Tavern in his aloha shirt for a drink. As he sees it, at least he’s giving people a chance to put their affairs in order and say goodbye to their loved ones.It’s definitely not the most glamorous job, but hey, it’s a job. And since the DNA’s never been wrong in predicting a death, he works with the confidence of knowing he’s doing his part to help people in their final hours.But Ram’s simple life is about to get a lot more complicated when one night…He receives his own death notice.The Reaper  (UK) is the first volume of six in the Death Notification Agency series.

One Man's Opinion: THE MAN WITH THE GETAWAY FACE by RICHARD STARK 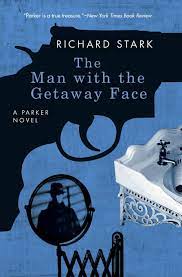 The Man With The Getaway Face?

It's a peach, and a perfectly ripe and juicy one at that.

Short and pithy, laden with tension within a story that's cut to the bare bones: