One Man's Opinion: THE WAY HOME by GEORGE PELECANOS 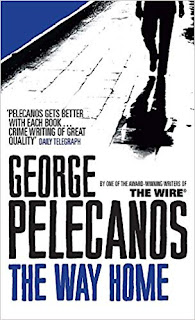 ‘Wayne’s features were compressed toward the middle of his face, folding into one another, so he looked like a piece of fruit that had begun to rot.’


I love being totally immersed in a book. The feeling of being swept up in a story. The range of emotions a quality writer can create simply by putting words onto a page. The change of head from the stresses of your own life to those of others. There’s little better if you ask me.


So, many thanks George Pelecanos for taking me out of my skin for the last few days. I’m extremely grateful for that.


The Way Home (US) is a cracking novel. It opens with the tale of Chris Flynn’s teenage years. He’s not gifted enough to excel in school or to enjoy the experience and his raging hormones and youthful anger are quick to take control of him. He likes to fight - it’s something he does well. He likes a drink and a smoke and enjoys driving. When all these things come together in one explosive evening, he finally stretches things too far and ends up in a prison for young offenders.


Chris’s father isn’t too impressed by his son’s exploits. Truth is, he’s hurt by the direction Chris has chosen and can’t see his boy as anything other than a disappointment and can’t understand how things turned out the way they did. If he was a little wiser, he might see that the apple hasn’t fallen far from the tree and Chris, in so many ways, is simply following in his father’s footsteps.


Prison life brings challenges to those incarcerated. There’s a heavy slice set between the institutions walls and this section is highly engaging, in spite of the fact that it’s back story. What it does is set the foundations for what is to come and, because they’re expertly handled, the trenches are deep and the structure is all the stronger for that.


Part Three of the novel sees Chris and his prison buddies doing their best to get along on the outside. Chris works for his father laying carpets with his friend, Ben, a warm-hearted young man damaged during his early years. They’re in touch with Ali, who spends his life trying to rehabilitate those who are on the slippery slopes of life and with Lawrence, a difficult character who’s making the best of a bad job and just about managing to keep himself afloat.


When Chris and Ben find a bag of cash under the floorboards of a house they’re working on, they are faced with a difficult decision. They weigh up the benefits with the potential danger of taking the cash and lave the bag where it is. But $50K is a difficult thing to keep secret and it’s not long before word is out and the money is gone.


Enter the owners of the money. They’re not happy bunnies and their own experiences of life behind bars have sucked out anything of their gentler sides. They’re prepared to go to any length to get back what’s theirs.


And so the pace and the compulsion to read on really ratchets up until it’s practically unbearable.

To me, this one’s all about loyalty, whether that’s earned or misplaced. The father-son relationship, stretched to the limit over the years is reshaped as the story unfolds. The bonds between the prison crew of Unit 5 are deeply embedded. The new relationships between the young men and their partners may be at fledging stages, but have gone beyond fooling around to something much more important. And the family ties are ever present for all of them, influencing and moulding their lives for better or for worse. These relationships lay at the books core and at the heart of the decisions of each of the characters. The crime element of the story may be white hot, but it’s the people that hold it over the flame.


The addition of each layer is a wonder. It appears without you noticing it’s being put together. The dialogue is as good as it gets and the strands bind tight when you need them to.


It’s a drama about loyalties, lives and growing up. It’s also food for thought, offering an insight into the role of the prison system for young offenders by shining a beacon on the need for reform. 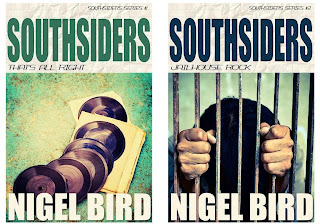 That's All Right FREE TODAY (US)

Ray Spalding's had enough of his wife, Paula. He's left his home in Edinburgh's Southside and headed for Belfast. It's safer there.
Unknown to Ray, Paula's also had enough of him. She's not going back home. Not now, not ever.
Jesse Spalding wakes up one morning to find both his parents gone. And he can't tell anyone or he'll be taken into care.
As time passes and bills need paying, all Jesse can rely on are his wits, his friend Archie and his dad's 1950s record collection.
Southsiders is a powerful short novel that follows the spiralling fortunes of Ray and Jesse, pushing father and son to their limits while they struggle against the odds in the darker shadows of two of Britain's capital cities.

It doesn’t take long for Ray Spalding to realise that prison is nothing like an Elvis Presley movie. The warden has no intention of throwing a party and the only bands Ray encounters are gangs of hard men. When an old adversary seeks him out, Ray decides his only chance for survival is escape.
Ray’s son, Jesse, is discovering that being on the run in the middle of winter is no fun. With his stamina stretched to the limits, he’s ready to surrender himself to social services. At least that way he can see his girlfriend again.
Danny Boy is the man in the middle. He thinks he can break Ray from prison and reunite father and son. All he needs is an ambulance, a funeral, the help of some of his old friends and a big slice of good fortune.
Southsiders: Jailhouse Rock takes you for an eventful ride on a Mystery Train where the destination is as likely to be the Heartbreak Hotel as the Promised Land.

One Man's Opinion: SEVEN WAYS TO GET RID OF HARRY by JEN CONLEY 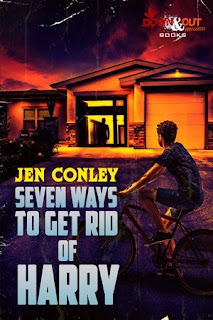 Given that SE Hinton penned several of my favourite books and that my own Southsiders series is based in the world of teenagers, I didn’t hesitate when the opportunity arose to pick up a review copy of Jen Conley’s Seven Ways To Get Rid Of Harry (US).


It’s a great idea. Danny Zeko’s hormones are taking control. He’s facing up to having to find his place in the school pecking order and the early onset of romantic ideas about the opposite sex at the same time as he’s dealing with the death of his father. His life is a whirlpool and, most of the time, he’s just trying to get by and work it all out. Problem is, the world keeps getting in the way.


There’s the school system, for a start. Danny can’t seem to do anything right. It’s not helped that he has a temper and is quick to resort to violence, but there’s plenty of injustice and he feels ever ounce of it keenly.

Throw in Danny's peers. They're all in the same cauldron, scrabbling about to rise to the top of the broth and not many of them care whose shoulders, heads and fingers they have to stand or break to get there.


And then there’s the Harry of the title. He’s the new love of Danny’s mum’s life. There’s constant drinking and fighting in the house and he picks on Danny and his sister with the meanness of an accomplished bully. When it becomes clear that Harry’s about to move in, Danny decides he has to get rid of him. Along with his close friend, he comes up with various schemes to cut the man out of his life forever. These range from the simple tactical to extreme interventions. And he puts his plans into action, too. Problem is, they tend to backfire and paint the world in darker shades.


There’s a lot to like about this tale. It’s fresh, different and well-paced. The characters are well-drawn and I particularly enjoy the way that Conley plays with them so that the balance of good and bad in everyone makes it difficult to work out precisely what to feel. There’s a nostalgic element, too, not so much for the period (partly because my early teens were in the previous decade) as for the time of life and the awful complications involved in surviving the growing up process. And then there's the fact that I imagine most of us have played around with the idea of getting rid of someone in our lives at some time (right?) and enjoy watching someone else take on the challenge for us.


As the book moves on, the sense that Harry needs to be wiped off the planet intensifies and the seeming impossibility of the outcome is painful to endure. This puts a lot of pressure on the author to pull off a stunt or some underhand trickery as an ending. What she does instead is take us to an unexpected place that fits the bill perfectly. It’s a satisfying tie up that keeps its feet on the floor and is all the more powerful for the lack of bells and whistles.


Don’t be put off by the likely Young Adult tag this book will carry. If there’s justice, Seven Ways will find success among Danny’s contemporaries and may even lure a few reluctant readers to its pages. It would be even fairer if it were to gather some momentum among readers of all ages. It certainly worked for me.

One Man's Opinion: MAN STANDING BEHIND by PABLO D'STAIR 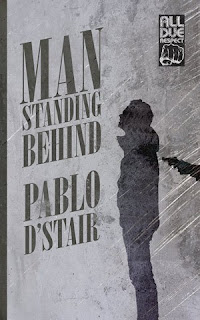 There are two journeys in this novella.


The first is a physical one. A nightmare of sorts. It’s Roger who’s taking the trip. Picked up at gunpoint, he travels round on a ghost train where every stop is full of unpleasant surprises.


The second is an internal voyage, Roger struggling to work out what’s happening, how he’s feeling and what he’s going to do about his situation.


Both overlap to produce a curious perspective of the evening. By watching the events unfold and also hearing a commentary of sorts, the views blur into one with neither carrying more weight than the other. It’s a bit like looking through a stereoscope and taking a while to adjust to the view until it creates a 3-Dimensional gem that drifts in and out of focus like the dreams of broken sleep. Which is what D’Stair does. He creates a gem of a story that is as unsettling as it is vividly real.


From the beginning, it’s clear that this is no ordinary work. There are no dots to join up, no templates to offer comfort and no traditional plot lines to guide us through. In many ways we’re on our own, just like Roger. And to make matters worse, it’s as if we’re right in there and holding the camera, Blair Witch style, witnessing the horrendous events unfold. Like Roger himself, we’ve been kidnapped and taken on a journey we’d rather have nothing to do with.

I've never read a D'Stair story that I haven't thoroughly enjoyed and Man Standing Behind is no exception. It has the hallmark snappiness in the dialogue, the laconic phrasing and the exceptional observation of detail as well as the disorientation of being taken into the unknown.

Which is my review. If you have no more idea of what the book's about than when you came along, then I reckon I've pretty much done my job. It's an intense and gripping piece and I think you should give it a read. Just don't expect sweetness and light.