One Man's Opinion: THE HAND by GEORGE SIMENON 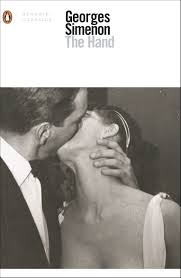 The Hand (US) tells the tale of a successful, but rather dull attorney in Connecticut, Donald Dodds. While attending a swish party, he walks into a bathroom and finds best friend, Ray Sanders, having sex with the host's wife. Donald turns to drink and there's an uncomfortable journey home as Donald, Ray and their wives battle against a huge snow storm.

Eventually, the snow gets the better of them. They leave the car and return to the Dodds' house. Upon arrival, they realise Ray has disappeared. Donald does the noble thing and says he's going to go out and search, but instead of doing so, he sits in his barn and smokes a lot of cigarettes.

Donald is now left with his own wife and Mona Sanders and as time goes on, he becomes increasingly distracted by Mona's free and easy way of being. He begins to obsess about her and it's only his staid attitude to life that prevents him from taking action.

As things progress, Donald unravels fairly quickly. The guilt he feels for not helping out his friend consumes him, as does his desire for Mona. His life spins on a sixpence and he no longer feels rooted to the person he has always been or connected to the wife who has been so loyal and helpful to him over the years.

The ingredients of a great story are all here - guilt, cover-ups, sexual tension, mid-life crisis, a claustrophobic setting and a police presence - yet it didn't work for me.

I was aware that we weren't going to get on from the beginning.

The novel is told in the first person, which should work, only Donald's voice isn't a smooth one. Far too many times, he alludes to what has gone wrong without getting to the point. He begins sentences on a regular basis and finishes with the dreaded ellipsis (not something I like to be overused) and I assume this is to build some level of tension in the piece. Instead, it made me frustrated and became irritating. Before long, Donald had become difficult company.

The essential premise of Donald's guilt caused by him leaving his friend to an assumed death simply didn't work for me. He chastises himself for killing Ray, yet he has done nothing of the sort. The fact that he wanted his friend to be dead isn't a strong enough driver for a life to fall apart, at least from my perspective.

In terms of any relationship to a book like Crime and Punishment, the novels are far apart. Instead of getting to see a human being slowly eating away at themselves, we're far too aware of Donald's feelings from the beginning. He tells us from the off that things have changed beyond recognition. Having him colour in the pictures of his journey when he's already shown us the outline takes a good deal of the intrigue and involvement away.

The sexual tensions are all easy to understand, yet they rarely raise beyond a simmer and don't really feel strong enough to tighten the noose around Donald's old life.

A genuinely interesting element of police involvement is far too quickly snuffed out, in my opinion. I'm sure this was deliberate, but the strand of tension was thrown away without a revisit and the story lost a little because of this.

In terms of the climax, it's all been written in the stars from an early stage. There's no surprise in the conclusion, nor in the manner of it's happening. Because I didn't really care much for Donald, it didn't carry much weight and I closed the book without feeling I'd ever been emotionally engaged.


On the positive side, I did find myself enjoying the devil-may-care attitude of the protagonist as he kicked against society and his own rigid sensibilities.

I also wondered about that opening and the sex in the bathroom. The moment feels autobiographical for some reason, as if Simenon's working something through. That element of the book raised my curiosity, but not enough to save the day.

It's not a terrible book, but I don't think it's a great one either. It's worth a read and if you enjoy psychological reads that speak of the hollowness of existence, there's something in it for you.

And if I've missed the point, am way off the mark, let me know. What is it that I'm missing, here? Would the historical context make it a ground-breaker in some way? I'd really like to find a new perspective. 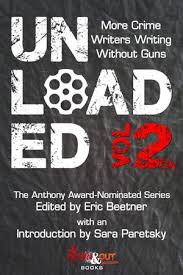 Unloaded 2 (US) provides a feast of reading in the form of a nicely weighted collection of short stories.

In turn we visit:

a forgery story and a boy who saves Christmas.

a primate escaping from the zoo who spots a hedge cutter and fantasises about chopping off the mean giraffe's tail.

an abused wife whose husband likes to soak in bubbles.

a boxer reflecting on scam in a casino and a hooker who hits hard.

a brother who likes to play hide-and-seek can never be forgotten.

the search for a missing cat which reveals more than fur and paws.

a baby needing a new home.

the mystery of a soccer team's suicides.

the writer who gives robots their personalities.

a father attempting to reconnect with his disabled son.

a first night as a punk rocker.

a man and his lover waiting for her husband to come home.

a lighthouse with a gruesome past.

a restaurant critic serving up a meal of his own.

a cop straying from the straight and narrow.

and, finally, a story with guns.

The range of styles and voices is broad, but they have in common quality writing and the ability to forge a world within only a few pages.

As with any anthology, I have my own favourites, but I think it would do you no favours to name them here. Instead, I'd urge you to read this yourself and pick your own. And if you really want my faves, you can always ask (one or two picks might surprise).

My guarantee is that you're in for a treat with this collection. There are some great twists and turns, some really powerful emotions, genuinely nail-biting journeys and enough swift blows to keep you interested throughout.

The final piece underlines why gun law needs to be seriously re-considered. It's a work of non-fiction that ties the project up perfectly.

Unloaded 2 proves beyond doubt that guns aren't necessary to create amazing crime fiction. It delivers enough of the starters, the main courses, desserts and drinks for even the most voracious reader to have their fill.

One Man's Opinion: THE CYCLIST by ANTHONY NEIL SMITH

This was his penance: The Cleaver was his Marley, except every day instead of just Christmas.

Judd didn't have what it took to make it as a Navy SEAL. Not only did he fail in his attempt to take the grade, he almost took out his infamous trainer, The Cleaver, in the process by shooting him in the legs and chest during a training exercise.

Now Judd is full of guilt. He's cut off ties with his father, hates his civilian job and is constantly haunted by The Cleaver who is now a drunken shadow of his former self and turns up like a bad cent whenever the sun goes down.

The only things that keep him going are hard, fast and dangerous cycling and the time he spends video messaging a rather cute Scottish lass called Cat. The cycling's all about getting away from everything and has the added bonus of the possibility of suicide by pedalling. Cat, on the other hand, offers something like hope. The chance that his life might not be over, after all.

When Cat suggests that Judd go over to Scotland for a cycling holiday, it's too good an offer for him to resist. He jacks in his job, cuts the physical ties to Minnesota and sneaks away from his conscience-pricking war-vet millstone while he's not paying attention.

What follows is difficult to sum up without spoiling things for you when it's your turn. Suffice to say, Cat isn't everything Judd expected. Her bike is barely fit for the road and she can't ride for toffee. More confusingly, she's uninterested in a physical relationship with Judd and plies him with enough beer and whisky to make sure that sex is out of the question. There's also a sticky issue of her other boyfriend, a rather disturbed young man who is sicker than rabies.

Cleaver, left at home with little left to fill his time now Judd has gone, smells a rat. He fears Judd might be another in a long line of SEAL suicides and decides he can't let that happen. He responds in the only way he understands, with a covert operation designed to protect his fellow countryman.

In The Cyclist (US), there's plenty of action for adrenaline junkies. There are also some great observations about the little differences between Scotland and the US. The Judd/Cleaver relationship is complex and compelling and their undulating loyalties  are like a journey through the Highlands themselves.

Pain equals fuel. He had a full tank.

Twists, turns, shocks and toe-curling brutality all play their part as this one free-falls with alarming pace to it's climax. A must for the fan of the action thriller, a no-go area for the faint-hearted.