Joam was a hot courier in a Los Angeles falling apart, where you lived or died by your reaction time behind the wheel. He was the best, but the best wasn't good enough. Eventually, he knew, he'd just be a splat on the pavement, frying in the 120 degree sun. Electing for experimental vehicle-integration surgery, Joam is merged with his ride. Now Joam's not only the fastest, most feared courier in LA: he's an absolute legend. But the experimental surgery was experimental. Joam's body is falling apart. Pretty soon he'll just be consciousness trapped within a machine.

"Accelerate is a killer read, a hypnotic stumble off the roof of our future. Think Mad Max by James Joyce."—Rudy Rucker, author of the Ware Tetralogy.

Read for free here: https://online.fliphtml5.com/huahm/kwhu/
Posted by Nigel Bird at 11:47 No comments:

THE COMPELLED (illustrated novella) by Adam Roberts and François Schuiten 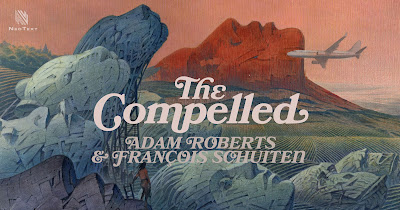 A mysterious change has occurred in humanity. Nobody knows how, why or exactly when this change came about, but disparate, seemingly unconnected people have become afflicted with the uncontrollable desire to take objects and move them to other places, where the objects gather and begin to form increasingly alien, monolithic structures that appear to have vast technological implications. Some of the objects are innocuous everyday things—like a butter knife taken still greasy from a breakfast table or a dented cap popped off a bottle of beer. Others are far more complex—like the turbine of an experimental jet engine or the core of a mysterious weapon left over from the darkest days of WWII.

Where is the Compulsion coming from? And—possibly more importantly—when the machines they’re building finally turn on, what are they going to do?

One Man's Opinion: THE STRANGERS IN THE HOUSE by GEORGES SIMENON 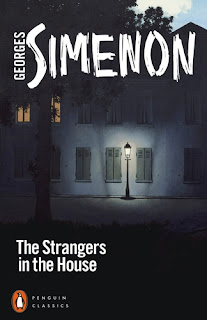 An odd one this. Not so much a whodunnit as a doesn'treallymatterwhodunnit. What's impressive about that is the lack of a need to know bears little impact upon the amount of pleasure I derived from the book.

In an impressive, though deteriorating, house in the middle of town, lawyer Hector Loursat has withdrawn from the outer world and also the world within his walls. He drinks and reads and drinks some more until he's unable to soak up any more alcohol and has to try to get himself to bed. He's dirty, unkempt, unfriendly and unpleasant. If it weren't for his wealth and his servants, he'd be drowning in his own filth.
His daughter, Nicole, is almost unknown to him. They eat together, but that's as far as it goes- there isn't even any conversation as they dine. It's partly because she's a mystery/non-entity to him that he hasn't noticed the life she's been living on the floors above. She's joined a gang of rebellious and anarchistic youths, discovered the thrills of breaking the law, enjoyed the delights of a sexual relationship and managed to hide away a seriously injured man in one of the spare rooms. Said injured man is one night found shot dead causing some alarm for the maid and arousing the curiosity of Loursat.
When it becomes clear that Nicole's boyfriend is a key suspect in the murder, Loursat slowly opens up, life a flower offering one final bloom. He leaves the house, finds that the world outside is at least as interesting as those existing between the covers of books and eventually takes on the case.
Each of the gang members has their character dissected. We get to see the misfortune, the opportunities or lack of, the social injustices of the French class system, family problems and the inner workings of humanity as the case is investigated and father and daughter begin to engage with each other in a way that hasn't happened since Nicole's mother upped and left.
No longer is Loursat intoxicated by booze alone. Instead he gets high on the sights, smells and intrigues of the cafes and bars in the locality.
Eventually, we're taken to the courthouse where the remainder of the novel is almost entirely set.
The dissection continues and the interest is maintained, but if the characters on the stand were actors, it would have to be pointed out that they're a little hammy and wooden.
In the end, without any clear reason, the case is solved when one of the gang melts while giving testimony. It's not expected and doesn't feel entirely plausible. That said, it really doesn't matter. As I mentioned at the start, the book gives a great deal of pleasure and that's almost entirely because of the study of the lawyer. It's fantastic seeing him in decline and thrilling to see him re-engage with life.
Moody and sensorial, this one will get under your skin, for sure.
Posted by Nigel Bird at 14:38 No comments:

One Man's Opinion: LIGHT AT THE END by HENRY G M JONES 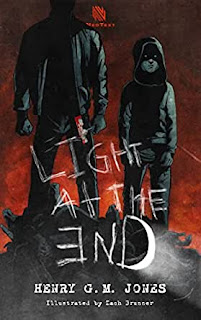 It's funny, given that one of the best stories I think I've written is Drawn In (a short novel about soul collection), that I often struggle with books and films where things slip into the supernatural. Or at least I think I do. I suppose it's down to the way it's handled by the author or director as to whether I buy into it or not. Perhaps the key is that it's just understood from the off that this is the way it is and that attempts to explain the rules of the realm are kept to a minimum.
On reflection, I can think immediately of work I've really enjoyed: The Sixth Sense, Blackbirds by Chuck Wendig, Stephen Blackmore's Eric Carter books, A Christmas Carol.
Another key factor in enjoying such titles is the journey of the central character. If it's exciting enough, packs an emotional punch, holds their feet to the flames and forces them to come to terms with something they struggle to accept, then I'm probably in.
Light At The End ticks all of the important boxes.
Gordon's doing his son's dirty work. It's not something he enjoys, but he believes that in following Wyatt's instructions that he might somehow fix things and settle his own conscience. Wyatt, directing his father to avenge terrible acts against children, is driven to make the world a better place and is also dead, something I accepted from the off because it was introduced so quickly and clearly that it just became the way it was. Besides, there was much more going on in the story to keep me from giving the supernatural element a second thought.
While Gordon is clearing the world of scumbags, the police are chasing down a killer who seems to have an uncanny way of uncovering horrible events that were previously hidden. How is the killer getting their information and how come the police are always a step or two behind?
The relationship between father and son is terrific. The police work is handled with energy and tension. There are action scenes and those that will have you thinking. On top of an excellent plot, already layered with conflict, you have to factor in writing that's tight and effective throughout- words aren't wasted, there's no fluff or fill, and each step accelerates forward to a conclusion that really could go in a number of directions.
In short, a fantastic story that's brilliantly told.
Loved it.
Posted by Nigel Bird at 14:53 2 comments: