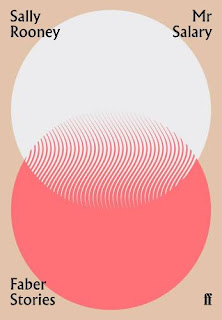 It's great to see short fiction sold like this and it's a fine way to explore the work of writers you love or those you might want to check out in the future.

Mr Salary is a wealthy Irishman who picks up Sukie upon her return from Boston. Sukie's motives for coming home are mixed. Her father is dying of leukemia, she isn't making significant relationships in the States, it's Christmas and the man she loves is in Dublin.

The size of the piece is small, but the scope is fairly large. Those who've read the novels will feel they're in familiar territory in terms of the glances of the poetic language, the abrupt and direct approaches of the protagonist, the sexual tension, submission and purpose.

It works as a one off and as it is, but I'd be more than happy to read on and find out what might lay ahead for the trio involved; there are certainly great riches to be mined and explored here and if it were an opening chapter, it would be a great springboard into a novel.

An inspired gift, Nancy (such a treat and the words in your card meant a huge amount), one that I can recommend for the Christmas stockings of 2022.

One Man's Opinion: THE NIGHT ALWAYS COMES by WILLY VLAUTIN 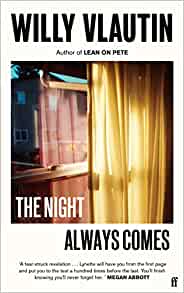 '"You know that easy thing he had? You know the way he was?"
"Yeah," Lynette said.
"He doesn't have that any more."

Happy New Year to you all and thanks for popping by.

I caught myself reflecting on 2021 and being glad to see the back of it. There were some tough things to deal with, the death of my father being the biggest of all. I began to attribute the worst of it all to the year itself, then realised that among the struggles were moments of joy and big success for those around me, which helped me to smile. On reflection, years are just blocks of time and if you look at a big enough block there’s bound to be more than one rough patch in there. Bad things happen to us all. Life, no matter how smoothly things are going, is problematic- health, death, working or not working, money, time pressures, stress, repairs, fitness, our own batches of flaws- it’s going to be hard. All is sorrow, as they say, and the sooner we grasp that the sooner we can embrace the whole package.

Which is why I love Willy Vlautin’s books so much. He deals with the struggles head on, balances the problems with the pleasures of simple things and constructs stories that are powerful, involving and engaging. He takes the ordinary, holds up a mirror to it and lets us know that there’s no such thing.

I’d been saving The Night Always Comes (US) for a rainy day, or rather a day when the storms had sufficiently calmed. I finally picked it up during the Christmas holiday and finished it within twenty-four hours; given my issues with concentration of late, that’s really quite something. As expected, it grabbed my attention, had my emotions rising to the surface and absorbed my thinking for the duration.

The novel follows Lynette, a young woman who is trying desperately to put troubled times behind her and to build something for herself, her mother and her brother. Her mother, however, has other ideas and finally admits that Lynette’s vision isn’t going to suit.

Lynette’s world is turned upside down. She has to fight to keep her past instabilities from taking over, while having to reach into the extremes of that past to find the passion she needs to survive what lies ahead.

In a bid to collect all the money she needs for a mortgage, she calls in markers from the men who have paid for her services and from anyone she’s lent money to in the past. Some are ready to cough up, others are determined not to help. After stealing a safe of one of her friends in order to get what is rightfully hers, she is forced to connect with characters who are woven into her history and characters she has never met before who occupy shady worlds where the need to survive comes before anything else.

It’s a beast of a book with a lot of power and passion. I was entirely wrapped up in it when I had it in my hand and just as wrapped up when I didn’t.

That said, it’s probably my least favourite of Vlautin's novels. There were a few things that didn’t feel quite right. First off, a lot of the conversations reach into Lynette’s history and always land on the buttons that need to be pressed to give us back story or to up the empathy levels. We spend a lot of time gazing backwards when the story has a natural forward momentum of its own. Secondly, Lynette’s role as carer to her brother didn’t appear to have solid foundation or genuine feel, contrasting significantly with Pauline, the nurse in The Free. Finally Lynette also already has a substantial amount of money to draw upon. To save so much, she’s had to endure torture and cope with things that no human being should have to, but some of the sting of her predicament is taken out because of her financial situation (most of the rest of the cast have crap lives with no safety net of any description).

Overall, this is a winner. A reading journey that I’d urge you to take. It’s a great novel and has certainly blown away many of the cobwebs of my mind. If you’ve read Willy Vlautin before, I wonder where you would rate it among his other books. If you haven’t, this is a great starting point from which I’m pretty sure you’ll want to set off to explore more- believe me you’re in for treat.