One Man's Opinion: TEN PLUS ONE by ED MCBAIN 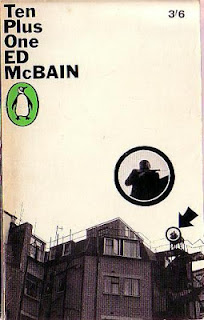 'Forget it. There's no protection against a sniper. I used to be one.'

Time for another McBain, Ten Plus One (US).

We have a sniper on our hands. Whoever it is, they appear to be striking at random and with unnerving accuracy.

The book opens wonderfully with the death of the first victim. It's something McBain uses quite often, a description of what a human being is doing just before they die. The sense of the everyday and the knowledge that they have friends, family, hopes and dreams, brings an extra power to their loss and makes the need to find the killer all the more pressing.

This one's down to Carella and Myer. As further killings take place, the pair disagree about whether the killer is the same person, given that there are no obvious links between those on the slab. They go through the usual legwork and procedures to glean what they can from witnesses and those close to the dead.

Taking a break from the action, McBain throws in something of a cameo for ex-con Frankie Pierce. Two bulls, unrelated to the 87th Precinct, stick their noses and their fists into the case. They pick Frankie up and, ignoring protestations that he's going straight and has a date lined up with a lovely woman who is prepared to overlook his past, proceed in trying to get to the truth in the only way they know. It's a brutal chapter and memorable enough in itself to warrant mention and it could stand up as a short story in any top crime anthology.

There is a link between the victims and when it's discovered the case maintains it's quality and pace until close to the end.

I really enjoyed this one, all the more so because of the feel of the 1967 Penguin edition in my hands. The sniper theme is effective and exciting and the interviews and case work is as entertaining as ever. My only grip comes with the ending and I'm not sure why. It makes sense of everything that has come before and brings its own tension, yet I felt that it all happened a little too easily. Perhaps it's because the outcome means it would have been impossible for the reader to deduce from what has come before. It doesn't fall flat, but it doesn't quite add the quality of icing that such a delicious story of a cake deserves. It's high quality, nonetheless, and it's definitely one for the to be read pile if you haven't had a visit already.

For another take, check out the Hark podcast.