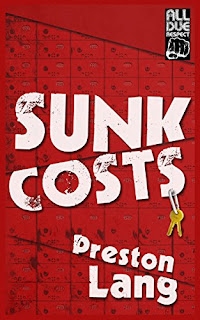 Here’s another great read from All Due Respect books.
Their latest, Sunk Costs (US), tells the tale of a young drifter who arrives into town and picks up a ride with from an attractive woman. Things are a little too good to be true and an explosive turn leads Dan into making a deal. All he has to do is to find a key in the office where the lady used to work.
Sounds simple enough, only it really isn’t.
There’s another woman, Kate, after that same key. Kate works in the office and realises that there may be riches to be had if they can get hold of it.
The situation spirals out of control as the prize continually and tantalisingly slips out of reach at every turn.
Dan’s street-smarts and con-artistry are put to the test as the danger level rises enough to swamp him.
Tightly written, punchy and engaging from the start, this is a low-life adventure that you won’t want to miss.
Thoroughly entertaining.
Posted by Nigel Bird at 13:18 No comments:

It’s quiet without you.


There’s too much space.


Enough room to swing that cat of yours.


pooling into seas of silent nothing.


Ghosts tease me into searching shadows


and all the you-sized spaces.


The bathroom’s free, the chairs all mine


and I can surf the TV with reckless abandon.


I write BLISS in the steamy mirror


and rub it out before the final S is drawn.


sprinkle crumbs on the carpet


and pile clothes in random places.


I’ll leave the cap off the toothpaste,


forget to flush the toilet


and miss the bin with every shot.


My shoes will live separate lives at the back door


while bikes stand rusting in the rain.


I will fill this world with chaos


eat with my fingers and leave the lights on 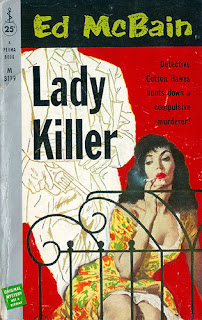 Meyer thought he would die in a way unbefitting a heroic cop. He would die of heat prostration, and the obits would simply say COP FLOPS. Or perhaps, if the news was headlined in Variety, SOPPY COP DROPS.


‘How do you like this Variety headline announcing my death by heat prostration?’ he said to Carella as they entered another hockshop. ‘Soppy Cop Drops.’


‘That’s pretty good,’ Carella said. ‘How about mine?’


Lady Killer has a sense of urgency from the off. A young boy delivers a letter to the police desk.


The words are made from letters clipped from newspaper. It could be a hoax. The detectives of the 87th can’t afford to treat it that way and have to give it their full attention. If the letter is telling the truth, they have a day to solve the case. And so the pressure begins.


As is often the case in the series, the weather in the city is extreme. The tarmac on the roads is melting and people are desperate to find some relief from the heat. McBain does his usual wonderful job creating the picture and the temperature features as strongly as the characters themselves and would be enough to get the reader to open a window even in the winter months.


The plot sees an investigation in which no stone is unturned. The lab examines the letter. The paper on which it is made is identified and tracked down. This takes the amorous Cotton Hawes to a bookshop in which he manages to fall in love. Boys dressed like the delivery boy are collected from street corners. Artist’s impressions are drawn. Every effort is made to identify anyone known as Lady and this takes us from saunas to La Via De Putas to the showy apartment of a musical star. No lead is strong enough and the detectives become anxious about the ticking clock.


In the midst of their frustration, we meet the author of the threat. He’s watching the detectives through a pair of binoculars that will later give the team more clues to go on. We discover that the threat is no idle one and that the motivation behind the letter is to give the police a chance to stop him from committing the serious crime he has planned. He’s going to leave a trail of clues that he feels should be easy to solve. Unfortunately, the detectives struggle to get onto his warped wavelength.


The pace starts well and builds nicely to the exhilarating climax and another really classy read.


A couple of things stand out to me in this one. The first is that there is only the one crime being investigated. That’s unusual in my experience to date. It’s often the weaving of different cases that helps to keep the books moving forward with the suspense I enjoy. It also means that the books usually have a range of tones and flavours that provide excellent contrast and variety to appreciate.


Lady Killer doesn’t suffer at all for having only a single investigation underway. There’s still a great range of characters to get to know and with Cotton Hawes at the fore, we have another opportunity to get inside his head.


If there’s a downside to this one, it’s a minor one. There’s something about the ending that left me a tad disappointed. It was nothing I can’t get over, yet it wasn’t as satisfying as I had hoped. I’d happily take opinions on that to see if you can persuade me otherwise. Let me know if you have the time. And is there anyone else out there who thinks the title may be referring more to Hawes that anyone else? If there is, same goes.


Even with that minor point, it’s still a five-star read to my mind and I already have the next one lined up for when I need a reading lift.
Posted by Nigel Bird at 19:45 No comments: