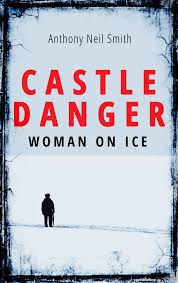 Anthony Neil Smith is a fine writer. I’m a fan, as you’ll know from previous reviews. The thing that I’ve come to expect from him is the unexpected. He doesn’t do things by halves and he likes to take you on wild journeys with great plots and mightily written characters. Castle Danger, a novel with gender on the agenda, is his latest and I found myself in even more unpredictable territory than ever as the chapters flew by.

The plot twists and turns more than most. Those changes are crucial to the drive of the story and I don’t want to spoil that by hinting at what’s going on. Suffice to say that nothing is what it seems and no one is quite who they appear to be when you first meet them.

To help me explain, here’s what the blurb says:

‘When a dead woman is fished out of Lake Superior, Manny Jahnke is there to discover the baffling truth: The "woman" in the ice is biologically a man. Before he can learn more, the corpse sinks back into the water, pulling Manny's partner along with it. Both disappear under the ice, never to be seen again. Now Manny has a missing victim, a new partner he likes even less than the old one, and a case no one wants solved. Or so it seems. Manny grows obsessed with the "woman on ice" whose secrets prove to be as vast as the Great Lake itself - and whose enemies turn out to be powerful enough to keep those secrets hidden. Only one thing is certain: if Manny survives, he'll never be the same man again.’

Manny’s living in a kind of hell. He lost his girlfriend after an accident and he’s picked up some bad habits. He’s also questioning who he is and what he wants to be in the future.

He gets partnered with Joel, an ex Marine and a new cop with no experience of police work whatsoever. They’re an odd couple. They share little in common and don’t particularly like each other. The only thing in their favour is that they’re both desperate and that they have each other’s backs. It’s a good job, too, because just about the whole world is against them.

They set about investigating the woman on ice case and land themselves in a total mess where their colleagues block their way, there are political restraints and they end up feeling like the villains of the piece.

I’ve seen mention that this book is less bloody and extreme than some of Smith’s others. That may be the case, but there’s still plenty of violence for those who seek it out and the exploration of Manny and Joel plumbs depths that are dark and uncomfortable and are pretty darned challenging if you ask me.

What I enjoyed most about the story were the technique and the voice of Manny. The story is smashed into pieces and restructured in an order that allows tension and curiosity to build. Manny’s slick telling of events bridges the switches between time and place. It’s playful and direct and points out the tricks of the narrative just as the lights go on in a reader’s head (or at least in mine). I enjoyed the fact that I was being toyed with and was happy to go with the flow.

If that doesn’t tempt you, then there’s a final bonus at the end of the book. ANS gives an interview that reflects on aspects of the work.

In short, this one’s different. Different for Smith and probably different to most everybody else.

And Then There Were Three... 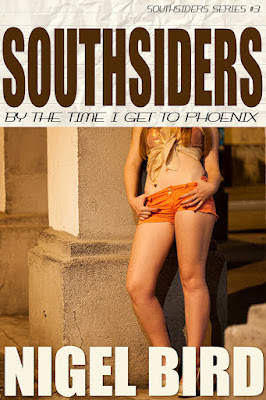 BY THE TIME I GET TO PHOENIX

Two Edinburgh PhD students head to the Phoenix Festival to sell legal highs. When a friend discovers that their Horn-E pills are poison, he faces a race against the clock to make sure that nobody comes to any harm.To complicate matters, the drugs were paid for with a loan from Edinburgh’s infamous Tony Fish. If they don’t have the cash to straighten their debt, there’ll be nowhere for them to hide.Jesse Garon’s obsession with Elvis Presley may be as strong ever, but as his hormones kick in he’s finding he has more in common with Jake Bugg. Jesse’s hoping that a weekend at the Phoenix Festival to see his new hero might thaw his girlfriend’s mood and allow him to take their relationship to the next level. Failing that, the Horn-E pills they’re selling on the strip might be perfect for the job.A tale of star-crossed love, tangled webs, gangsters, bloody men and a dog called Brandy.
Posted by Nigel Bird at 13:32 No comments:

One Man's Opinion: THE CON MAN by ED McBAIN 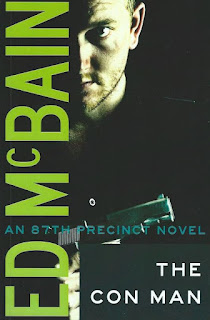 ‘You want me to follow him?’ The cabbie watched Teddy nod, watched the door of Donaldson’s car slam shut, and then watched as the sedan pulled away from the kerb. The cabbie couldn’t resist the crack.
‘What happened, Lady?’ he asked. ‘That guy steal your voice?’

The Con Man (US) was my latest visit to the 87th. I felt at home, as I increasingly do in these books, and very much enjoyed the read.

Essentially, we get to watch some of the con men of the city go about their business. Some are in it for the short con. Some have far more sinister intentions, like the man responsible for the appearance of a floater in the river whose tattoo of a heart is about her only distinguishing feature.

Much as I liked the story, it’s far from being my favourite.

I was trying to work out why that might have been. The usual ingredients are here, after all.

My biggest issue with this one is the amount of authorial intrusion. For me it slipped from being part of the voice to getting in the way. I guess this is a difficult balance to find and others may take it as simply being McBain’s style. Whilst I understand that, it rubbed me up the wrong way on this occasion.

The cons were also disappointing. Knowing what was about to play out detracted from the stings and took away some of the romance I usually associate with the occupation.

A final niggle was Teddy Carella’s involvement in the case. I love the couple individually and as a pair, but having Teddy so directly in Steve’s work doesn't feel right. This may be more that she also became central to the Cop Hater case as it reached its climax than anything and it seems early for her to be right back in the thick of things.

Highlights for me centred around the tattoo parlour of Charlie Chen. It’s here and in her thoughts on getting some art work of her own that Teddy shines. There’s also some great description of the lab work and the murder cases are engaging as ever.

Would I recommend The Con Man? Course I would. It’s good stuff. Will I be pleased to move on the next novel in the series? I’m already looking forward to the read and have it cued up for a rainy day.
Posted by Nigel Bird at 11:47 No comments: