One Man's Opinion: THE APRIL DEAD by ALAN PARKS 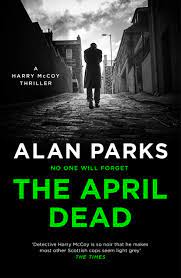 The first of my summer holiday reads this year was The April Dead by Alan Parks. It's the fourth in the Harry McCoy series and it's another stunner in my humble opinion.
Things kick off with an explosion in a flat where the dead body of a bomb maker is found and there's evidence of a wounded victim who is nowhere to be seen. Later explosions will put Glasgow on full alert and everything seems to point to a full-scale outbreak of carnage when April finally arrives. Matters become more pressing when links to the Irish paramilitary are suspected and the British secret services decide they're not happy about McCoy sniffing around too closely.
Steve Cooper, childhood friend of McCoy, is about to come out of prison and something seems off. There's internal wrangling in the underworld and the only certainty is that things are not going to be sorted with handshakes and pats on the back.
And there's a missing American submariner from the US naval base whose father manages to grab McCoy's attention and has him investigating the case when he senses there may be overlaps between this and his other work.
The April Dead is thoroughly entertaining. Time and place are created very strongly and it can seem as if Parks has picked you up and placed you directly in the scene so you can see, hear, smell and feel what's going on around you (think virtual reality without any technology). McCoy and Cooper are terrific characters and the way that loyalties and morals are played with when they get together adds a great extra dimension. Plot is also terrific and the pacing is bang on.
There are places where apparent coincidences are stretched to the point of causing raised eyebrows, but those moments can be easily forgiven on account of the strength of the story and because of the complexity that these elements bring to the plot.
Seriously good and very entertaining. Cracking Scottish crime.
Posted by Nigel Bird at 16:20 1 comment:

Dig This Hole: The Complete Flipbook from NeoText 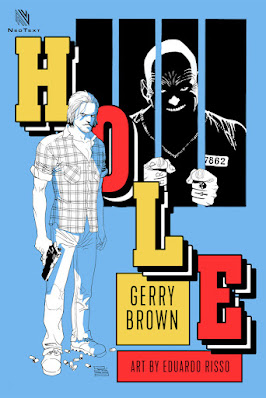 Moundsville State Prison was rotten to the core. The guards were almost as crooked as the cons. Gangs ruled the jail, and Davie Ingram ruled the gangs.

But this time Davie's crew picked the wrong man to shake down. He's a man who won't take kindly to seeing a video of his brother being stomped by half a dozen vicious goons. A man who's a professional in the art of making people pay. Not with money, but with blood.

Normally, an appetizer like this one would have you clicking links and finding out where you can get hold of this gem.
Not this time.
The NeoText Flipbook below allows you to read the whole thing. Not only that, you get to delight in the illustrations as put together by Eduardo Risso.  All you need to do is grab yourself a coffee, fasten your seatbelt and click on the image below. The book will expand to fill your screen before your very eyes.
If you're interested, there's also a kindle version available via Amazon in the UK and in the US.
Let me know what you think in the comments. I'd love to hear what you have to say.
Posted by Nigel Bird at 11:57 No comments: