I found out today that my story 'Sisterhood' has been accepted into the 'Best Of British Crime Stories Volume 9'.  That's about as good as it gets as far as I'm concerned and I'm honoured to have been selected.

Thanks to Maxim Jakubowski for all his splendid efforts.

News came the morning after I bought my first copy of 'Best Of British Crime Stories 8' which is an extraordinary collection. I already have my 2 contributor's copies, so this is one I promised to a friend for lending me the box sets of 'The Wire'.

In case you haven't seen the cast list for Volume 8, then it's about time you did.

Any one of those would be worth the entry fee alone, so what are you waiting for?

Pulp Ink also cracks on apace.  We're at the proof-reading stage and it won't be long until it's sent on to Needle Publishing for the setting up.

And thanks to all those who put up comments on Pablo D'Stair's covers item.  Looks like you made his mind up for him.

So to today's post where Roy Innes interviews Roy Innes, author of the Inspector Coswell series published by NeWest Press, : Murder in the Monashees (2005) West End Murders (2008) and Murder in the Chilcotin (2010). 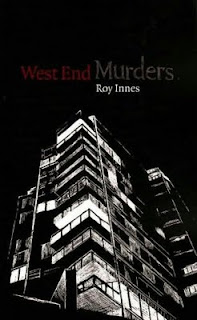 Interviewer: Your first novel was published in 2005. That would make you 65 years old at the time. Isn’t that taking the “late bloomer” to a bit of an extreme?
: Yes it is, but I needed the income earned from fifty years of work in the salt mines to support my writing indulgences. My wife insisted that my children be fed first.

Interviewer: How much of you is there in your protagonist, Inspector Mark Coswell of the RCMP?

: None, of course. He’s single, well paid and can indulge in whatever he likes—gourmet food, vintage wines and ogling fine female figures. I’m old, have to watch my diet and….okay, maybe I’m a little like him.

Interviewer: You are barely known in your own country and virtually unheard of anywhere else. Why do you think that is?

: I’m still waiting to be discovered. Small publishing firms can barely afford a coffee urn in their offices let alone major marketing efforts. Word of mouth is a slow process and for some reason it never seems to go international despite excellent reviews at home.

Interviewer: Do you think that the lack of significant angst in your protagonists goes against the grain of modern crime fiction?

: It does and I’m happy writing that way. I like my men to be men, not wimps stewing in their inadequacies. My RCMP officers are real people; guys I like to have a beer with.

Interviewer: Two of your novels are set in the wilderness regions of B.C. which wouldn’t likely be appealing to women readers (who buy the majority of books). Are you making a mistake doing that?

: Probably, but I believe in the advice: write what you know. Since the great Canadian outback is where I’ve spent a great deal of time, that’s where I set them. My father read every book Zane Grey ever wrote. Surely there are men like him still around.

Interviewer: There is very little graphic violence and even less sex in your novels. Why?

: Sex? Violence? At my age, the plot’s the thing. Got to keep my mind working and puzzles are therapeutic. Give me a mystery every time. Leave sex and violence for the movies.

Interviewer: Have you written anything other than mysteries?

: Yes. I write short stories. I like the form. It doesn’t have the drudgery that churning out a novel entails and yet it still features storytelling and I like to think that’s where my talent lies—storytelling.

Interviewer: Who is the modern author you most admire?

: Raymond Carver. He’s a master of modern prose and can make a story out of anything. If he were standing in a lineup at a convenience store checkout counter, he’d have a complete short story formed in his mind before he pulled out his wallet. Those standing with him, the clerk, the man stocking shelves would end up memorable characters in a perfectly written piece.

Interviewer: Is there a crime writer whom you’ve read and particularly enjoyed who isn’t one of the “big names”?

: Yes. Ruth Birmingham. Terrific series that has everything I like in the genre—great plots, characters and lots of humour. I’ve touted her writing to everyone and have just discovered that “she” is a “he”—Walter Sorrells. Brilliant! How to draw the female reader.

Interviewer: Will you continue writing crime novels or do you have aspirations for something more literary?

: The great Canadian novel sits incubating in my computer. It’s true that crime novels are not considered literary, although I would argue with that. Try to write one. Not so easy. Short stories are definitely a literary form and I will continue writing those, but crime fiction is what got me published so I won’t abandon that. The fourth in my Inspector Coswell series is underway.


Many thanks Roy.  We're looking forward to that Great Canadian novel.