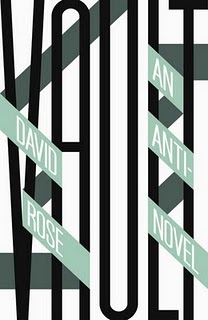 Why did you write Vault?

As a sprat to catch a mackerel. The mackerel
meanwhile has got away, for the time being at least;
you are left with the sprat.

Any writer trying to place a short story collection
with a publisher will be asked immediately: Are you
working on a novel? I decided to embark on one in
order to answer truthfully (writers should always be
truthful), Yes. Its whole raison d'être was as a work-in-
progress. Sadly progress on the work outstripped
progress with the placing of the stories, and both were
then placed in the bottom drawer.

How did it get out?

By luck. Or rather, divine intervention, a deus ex
machina in the shape of Nick Royle. In a chance phone
conversation, he asked if I had written anything longer
than the short stories he'd seen (this was years after its
interment). He then, in his well-known and heroic
gluttony for punishment, asked to read it. He tried to
place it, first through his agent, later by himself. He
finally succeeded, and is now enjoying the meagre
reward of (non-financial) satisfaction.

Why is it called Vault?

I simply wanted a two-edged title to fit the double-
stranded construction, and short to fit the length. Hence
a single-word pun (which has no further significance).


Titles I find a struggle. So my next novel is called
The Untitled and, reversely or perversely, is constructed
from puns. For which reasons it may well not escape
from the bottom drawer.

Where did the image or motif of the centaur come
from?

From my consummate creative capacity.

Are you being truthful? The alliteration suggests not.

You're very perceptive. It turns out - and I was
delighted to discover this - that it possibly comes from
a brilliant essay by Hugh Kenner on Samuel Beckett's
work and its many but unobtrusive references to
bicycles, the essay's title being The Cartesian Centaur. I
don't remember initially reading it, but the annotations
indicate I did. I only rediscovered the essay a few
months ago; too late to retitle the novel Whatt?

And the sniping? The espionage? Where did they
come from?

Bill Broady in his endorsement alludes to Len
Deighton. Were you aiming at a literate thriller?

I was aiming for thrilling literature. Sadly...

What is your definition of Literature?

Literature, like all the arts, is a process for converting
misery to compost.

Would you care to elaborate?

So, Vault not thrilling literature. Notwithstanding, is
it any good?

I haven't read it.


(Sea Minor answers yes to the question.  To find out

exactly what he thought click here)
Posted by Nigel Bird at 21:10