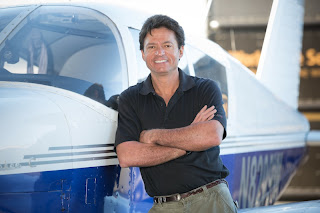 When we first met pilot, retired government assassin and would-be Buddhist Cordell Logan, the hero in your first mystery-thriller, FlatSpin, his life was literally in a flat spin.  Your second book in the series is entitled, Fangs Out. Has turned into a vampire?

Nope. No blood-sucking. ’s still a financially struggling civilian flight instructor, still residing in converted garage apartment in the lavish resort town of , where he can barely afford to live. The title of the book, by the way, derives from an expression used by fighter pilots who are spoiling for a dogfight.

Everyone seems to love Mrs. Schmulowitz, ’s zany, 80-something landlady from , and his kitty roommate, Kiddiot, the world’s stupidest cat. Will they be back in Fangs Out?

Absolutely! I had one reader email and threaten to hunt me down if I got rid of either one. Hell hath no fury like an angry reader.

What was the craziest response you’ve gotten to Flat Spin this far?

You mean, aside from that reader who threatened to do me harm? With rare exception, critics and readers alike have been incredibly positive in their response to Flat Spin. They’ve been the same so far in their assessments of Fangs Out. I was particularly grateful for the New York Journal of Book’s review, which said:

“Told in the first-person, Fangs Out is the second book in the widely acclaimed Cordell Logan series, and like its predecessor is filled with bullet-speed wit, original characters (and a cat to die for), plus a fast-paced and intelligent plotline, climaxing with more than one surprise, especially the surprise on the very last sentence of the book.

“David Freed is a master of mordant one-liners for which Raymond Chandler’s leading man, Philip Marlowe, would have given his eye teeth. Highly recommended for crime and thrillers fans alike.”

Are most of your fans pilots or non-pilots?

Definitely non-pilots, simply because there are a lot more of them than there are those of us afflicted with the crazy flying bug. It’s been especially gratifying, the supportive response that pilots have had to Flat Spin. They can be sticklers when it comes to factual detail. So far, none has taken me to task for technical inaccuracies.

Why do I get the feeling you have a license plate holder that says, "I'd rather be flying." Is it hard for you to sit at your desk and write when it's a cloudless day with no wind?

You have no idea how hard. Virtually Impossible, is more like it. Where I live—in —has the finest, most benign weather on the planet, in my opinion, which makes it an ideal place to fly. I try to get up in the air at least once a week. When I don’t, I start having psychological withdrawal symptoms. Not a pretty sight.

Cordell Logan has a witty, sarcastic, and dangerous edge to him. Agatha and Anthony Award-winning novelist Sara Henry describes him as "stubborn" and "wisecracking." Is he like you?

He is, and he isn’t. I can certainly be stubborn under the right (and sometimes wrong) circumstances, and I’m not beyond cracking wise in mixed company. But, unlike , I don’t regard myself as a violent person. It’s been a long time since I fired a weapon, and any fist clenching I do these days is in response to the sad state of affairs in .

Lots of mystery writers these days spend time on the circuit, going to mystery conferences and doing signings at book stores. How do you decide how and where to promote your books?

I tend to be a rather shy person. I’m not big on drawing attention to myself. Unfortunately, being an author these days, especially a new one like me, entails doing a lot of public appearances if you hope to make your book a success. So, basically, I do what I have to do. I go to conferences. I go to bookstores. But I’m fairly selective in both location and number. In truth, every time I do a signing or sit on a panel, I meet great people. Someday, maybe, I won’t feel like such a self-promoter doing it.
What's a secret we would never know about you by reading your books?

I dislike bananas and I essentially distrust all monkeys except, perhaps, orangutans. And I take the latter on a case-by-case basis.

Tell me about and Cordell. Will they ever get past their "past"?

You’ll have to read Fangs Out to find out!

Writing is writing. Whether it’s fiction or nonfiction, my goal is always the same: to write cleanly, clearly, and as compellingly as I can. The reward is not in the end result, but the process. So many writers wish they had the time to write; they’re too busy going to work, trying to pay the bills. I consider myself incredibly fortunate in that regard. Writing is my work. I hope it will be forever. 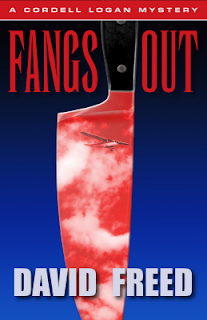 Moments before he is executed, the killer of famed Vietnam War hero-pilot Hub Walker's daughter makes a startling allegation: the real murderer is 's close friend, a prominent defense contractor. wants to hire somebody willing to spend a few days hunting up information that will refute the convicted killer's groundless but widely reported claims, and help restore his friend's good name. That somebody, as fate would have it, is sardonic civilian flight instructor, would-be Buddhist and retired military assassin Cordell Logan. Thus begins one of the year's most suspenseful mystery-thrillers.

A Medal of Honor recipient married to a former Playmate of the Year, resides in the swanky enclave of , overlooking the . is convinced that working for will be little more than a paid vacation - a chance to rub shoulders with a living legend while rekindling 's relationship with his own enticing ex-wife, . But after flying to in his beloved aging Cessna, the Ruptured Duck, Logan is quickly drawn into a vexing and deadly jigsaw puzzle. The deeper he digs, the murkier the truth appears, and the more in danger he finds himself. Who really killed the war hero's daughter, and why? Somebody in "'s ," wants to stop from asking questions, and will stop at nothing to silence him.

ADVANCE NOTICE FOR FANGS OUT

“Told in the first-person, Fangs Out is the second book in the widely acclaimed Cordell Logan series, and like its predecessor is filled with bullet-speed wit, original characters (and a cat to die for), plus a fast-paced and intelligent plotline, climaxing with more than one surprise, especially the surprise on the very last sentence of the book.

“David Freed is a master of mordant one-liners for which Raymond Chandler’s leading man, Philip Marlowe, would have given his eye teeth. Highly recommended for crime and thrillers fans alike.”

“Freed’s skills as a reporter, screenwriter, and pilot made his first tale (Flat Spin) a delight, and this one continues that roller-coaster pleasure. is a stubborn, wise-cracking, ordinary guy with some extraordinary skills and a passion for flying. He does have a few problems following the Buddha’s precepts on nonviolence, but readers will eagerly look forward to his further attempts to combine flying and detection.”

“An intriguing mystery. When is in the air, Freed’s series really takes off.” 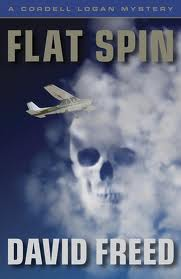 David Freed is a pilot, screenwriter and former Pulitzer Prize-winning journalist for the Los Angeles Times. His work appears regularly in Smithsonian’s Air & Space and The Atlantic, where was honored in 2011 as finalist in Feature Writing by the American Society of Magazine Editors. David has also worked extensively within the intelligence community.