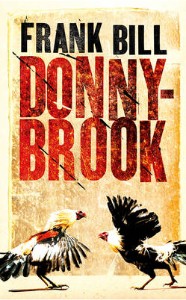 A little appetiser before the main course is the news that Mr Suit is free today and tomorrow.  It's a crime romp that's aimed at being a fun read and so far it's been received really well.  You can find it at Amazon in the UK and the US.

Truth be told, Mr Suit might be a fantastic short read, but it doesn't come close to the meat and potatoes provided by Frank Bill.  Here are my thoughts on Donnybrook.  My Frank assessment:

I received my copy of Donnybrook as an advanced review copy from William Heinemann and was very excited to find it in the post on the day it arrived.


My excitement was based upon my love of Frank Bill’s collection ‘Crimes In Southern Indiana’ and other stories of his that are peppered around the internet and a range of highly-regarded anthologies.


I had a strong sense about the world I’d be entering – something strong and dark and gritty – but was unsure of the author’s ability to complete a novel with the immense talent he shows in his short work.


I needn’t have worried.  Mr Bill has ticked all of my boxes and, in this story, created a few more that weren’t there before.


It opens with a storm of violence.  There’s a robbery and a couple of murders and a sense of mayhem.


From there the various characters drift apart, but they’re all destined to come together at the Donnybrook, a ‘last man standing’ bare-knuckle fight that takes place over a couple of days in Orange County.


The various strands are all wonderfully handled.


There’s the cop hunting both robbers and killers alike; there are the makers and dealers of crystal meth; there’s a martial arts master; an entrant to the fighting contest whose focus is the huge cash prize; a man blessed with visions of the future; and a host of everyday characters who are all strongly written and play their parts with honesty.


The prose is extremely tight (he doesn’t waste words, he writes them) from start to finish and this adds to the powerful, earthy sense that the book portrays.  This is particularly true of the dialogue, which is wonderfully sparse at times.


A large amount of the book describes episodes of violence.  It’s the kind of violence I like to read and feels like it’s written by someone who knows about it from first-hand experience.  The sense of pain and brutality is very real, yet it is also plain in its construction.  Among the things that makes the action such a pleasure to read is the sense of siding with one brawler or another when it takes place; the author has created the characters that are rotten to different degrees of putrefaction, but they all share human traits and some feel more human than others.   Throw in a broad range of motivations and the mix is nigh on perfect.


As well as the hard core elements of the narrative, there are also moments of great subtlety.  Lines and situations can be packed with a sense of beauty, humour and poetry that act as a great contrast to the other textures, even when they relate to tragedy.  There’s a real pathos here and these moments add a full range of shades to the blacks and whites of the book.


Donnybrook is a male dominated novel.  It’s hard-hitting and punchy and is a really fast-action read.  My adrenaline was up throughout and my admiration remains undiminished.


Frank Bill is one of those writers who should be read and I intend to follow him wherever his work takes him.


Donnybrook is available in the UK and US as Kindle as well as in paperback and hardback copy.  What are you waiting for?