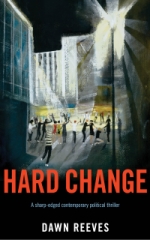 And now, I have a dance for those looking for exciting new talent.  If that's you, prepare to be excited.  Dawn Reeves, ladies and gentlemen:

What story does Hard Change tell?

The one-line description of the story was the hardest thing to write but it totally captures what’s at the heart of it: “When a girl’s body is dumped in a bin, a city is forced to explore the boundaries of private interest and public good…” The novel focuses on the gripping ramifications of a murder, it pokes around in the workings of power, shines a light on how markets out of control foster crime, crashes around in the system and speculates how individual and collective action can make a difference. The characters and their families, the organisations – (the police, the local authority, the Health service,) the neighbourhood and the city itself all have their own stories that are driven by the incident. The stories are twisted together; inescapable for the characters and hopefully compelling for the reader.

What’s different about it?

It isn’t a traditional political thriller, it’s not international, it’s not Westminster, it’s local and personal politics but it’s about big picture questions – the sort of society we want to live in. I’ve called it a town hall thriller as that where its mainly set, its not a new genre but I don’t think there are that many books that live in that sticky mire. Hard change is about strategy rather than procedure, it’s about work, important work done by real people under major stress where the suits – like I used to be - are heroes and villains.

Where did the story start?

I worked with a group of managers trying to turn around a chaotic city centre, it included council planners, police, licensing managers, public health experts, bar and night club owners. When someone said, “and there are the kids in the bins,” my ears pricked up. The shocking thing was that they didn’t blink. The inference was that kids end up in bins, for all sorts of reasons, so what? It’s so common that there are national guidelines on emptying bins in town centres, bin men are required to bang on the side of the tubs. If the kids aren’t dead or if they aren’t discovered, they might well be through a transfer station, compacted or sent as waste to India. I had to write a story about that.

Where are the thrills?

Pages 1, 16, 23, 38, 50, 65, etc – (sorry) there’s no formula or algorithm. It depends on the reader – for me the thrills are in the places where life speeds up, where it skirts the edge of tragedy, where the life or death aspects of work (for people not in uniform) suddenly crystallises and where the political gets personal. There’s a lot of alcohol in the mix and current readers seem to find the last 150 pages fly past in a blur.

Society – (of course) there is such a thing and we are it.  We live it, our decisions affect everyone around us, we are all connected and we choose to engage with it or not. We try and influence it or not. Yes there are criminals and crimes, good organisations and bad ones but at one of the critical points in the book – the question the characters have to deal with is:   what is our bit of this story and are we collectively prepared to try and change the ending – could we prevent another murder? Hard change indeed.

I’ve worked in and around town halls for 20years. The reason I was so motivated to write about public service is because it’s something I’m proud of in the UK and because it’s under attack. Its constantly undermined by government policy and the press, Council’s are set up to fail, services are portrayed as being only for people who can’t afford to buy them privately, the dominant narrative is that its run by idiots who don’t care and as for the lie of fat cats in town halls doing nothing – compared to the damage done by bankers – don’t get me started.

People in public service are the same as anyone else; they want to do a good job, and care about what they do and in the main are trying hard in difficult circumstances to make a difference. There has to be a system and the system has to work for everyone but I don’t accept the idea that Society is broken and that it’s all crap – it isn’t. It’s flawed but that’s because we’re all a bit flawed aren’t we? I am and so are my characters.

Where is the story set?

Not telling! I’m chuffed that readers so far have guessed that it’s set in at least 5 different UK cities. It’s an amalgamation of places I know and love. I wanted it to be meaningful enough for readers to connect with the environment without it being bland or anytown. And I didn’t want to make up a fictitious name – too embarrassing.

Dancer first, any kind, to house music mainly. I also love tap dancing, salsa but not tango. Had my first tango in Paris recently – too intense and controlled. Writer second – I’ve tried painting, poetry and stand up comedy too.

What’s on the soundtrack to the novel?

Great tunes - e.g. The Bottle – Gill Scott Heron and Brian Jackson, Food for thought –UB40, Get up off our knees – Housemartins, Walls come tumbling down – Style Council, Ring my bell - Blood sisters, Lola’s theme – Shapeshifters, You can get it if you really want it –Jimmy Cliff. Hard rain’s gonna fall – Bryan Ferry, Lisa Stansfield and Coldcut – People Hold On.
See my blog for the full list…

A clash of moral codes, the edge of duty, a siege, a former child soldier playing for a championship club, child poverty and I’m back in the boiler room at the town hall.

Hard Change is available from Amazon stores in the UK and US for kindle, as well as in paperback form (US and UK)
Posted by Nigel Bird at 07:32