I love a good oxymoron. As the author of the “Beat on the Brat” story collection, Nigel Bird too may enjoy “intelligent dumbness,” a description applied to The Ramones. This kind of duality appeals to me in reading experiences as well. Quite often, I find that bleakness, once you make it through to the other side, is oddly uplifting.

Recently, a friend’s comment brought Nelson Algren (1909-1981) back to mind. Right after New Year’s 2013, this blog post called Algren “the great, forgotten progressive writer that you should know.” Another just a few weeks before concurred, saying, “At some point, American letters forgot about Nelson Algren.” I had been vaguely aware of Algren in the past – I’d picked up A Walk on the Wild Side for 50 cents or so from a street book table, and I paid full price in a bookstore for The Man with the Golden Arm. That was around 2010, but I never got around to reading either until last year.

The edition of The Man with the GoldenArm that I got had a really nice bonus – a superb introductory essay called “The Harsh Compassion of Nelson Algren.” It was written in 1990 by James R. Giles, who is now Professor Emeritus of English Literature at – not far from , the city so closely connected to Algren’s life and work.

Giles’ oxymoron immediately intrigued me. He focused on a key aspect of Algren’s vision – “an unrelenting absurdity at the center of human existence. . .chaos and absurdity dominate until the final absurdity of anonymous death. Committed writers and artists who perceive themselves as having a primary responsibility on behalf of the dispossessed can bring meaning and redemption through their descriptions of such a world.”

Giles also singled out another element of Algren’s work. “Turn of the century American naturalists Theodore Dreiser, Frank Norris, Stephen Crane, and Jack London rarely used comedy in their fiction. . .In contrast, Algren’s comedy is central to his harsh compassion.”

The phrase made me think too of Hubert Selby, Jr. (1928-2004), who shocked readers with Last Exit to Brooklyn in 1964 – the book has lost little if any of its potency since then. Small wonder, then, that Giles wound up writing a work called Understanding HubertSelby, Jr. in 1998. A 2012 symposium began with another essay from Giles, which started with an account of how in developing the book, he gave Selby a telephone call out of the blue. Giles had some trepidation, because his image of Selby was “reclusive…possibly very angry.” He turned out to be pleasantly surprised by how kind and cooperative he found “Cubby” to be.

Readers and critics alike have identified Selby’s empathy for his characters and their tortured lives. Back in 1976, another critic – Dean Flower in The New York Times Book Review – wrote, “However dissatisfied he might be with human behavior, Selby is obviously interested in and compassionate toward man’s suffering.” 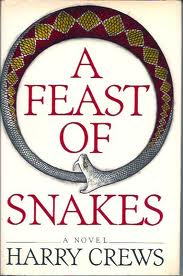 There’s another prominent “cult” author whose hallmark is harsh compassion. That is Harry Crews (1935-2012). Perhaps no work of his demonstrates this quality more clearly than his memoir of growing up dirt-poor in ’s , A Childhood: The Biography of a Place (1978). Yet it’s also on display in his novels, perhaps most notably in the one that many readers regard as his best, A Feast of Snakes (1976).

As was Algren, Crews was mordantly funny. In the back-cover blurbs for A Feast of Snakes, Joseph Heller referred to Crews as “either our meanest funny writer or our funniest mean writer.” Humor is not as apparent in Selby’s work – but it’s still there. One scene in LastExit to Brooklyn portrays a group of rowdy kids wreaking havoc in a slum housing project. It takes place late in the book and provides a dash of levity after much horror before it. In a 1981 interview (which Giles had found informative), Selby himself said, “I have my own personal sense of humor and it’s inherent in the actions, so it just kind of stays there because it’s organic. A lot of people don’t see the humor, although maybe the right word is ‘irony.’”

Nigel Bird explores the same kind of territory in his work – especially with Smoke – and that’s why I enjoy it.
Posted by Nigel Bird at 16:19