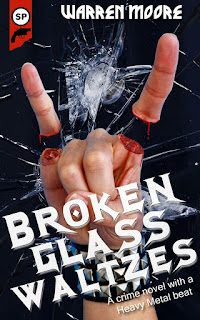 
Q: So tell us about Broken Glass Waltzes.


A:  Cincinnati, somewhere around 1990. Kenny Rockford plays drums in a heavy metal cover band on the bar circuit in this part of the Midwest. He wants more, but he’s getting paid and getting laid, so inertia is strong. One night after a show, he brings the wrong girl home. A very wrong girl. Hilarity ensues, and by hilarity I mean sex, violence, sexual violence, loud music, and all the other things that make life worthwhile. Also, motorcycles and Cincinnati-style chili.


Q: How long have you been writing?


A: Since before I could write. There’s an audiotape my father made when I was about three. He’s chatting with me a bit, and I tell him I made up a song, which I then sing. It’s about spiders and how people love to get into their warm webs. When I finish, Dad says, approvingly, “That’s pretty weird, kid.” And in a way, I’m still writing that song, except the webs are different, and the spiders only have two legs.


I started getting paid for my writing when I was in high school – I wrote love poems for folks who weren’t good at it. The Cyrano thing. I also wrote ad copy for pay around that time – a 25-part public-service campaign on historical figures. I wrote a humor piece (called “Rock and Roll Girls (and Other Horror Stories)”) for a college lit mag as an undergrad, and I started writing contemporary/urban fantasy for a semiprozine called Low Orbit when I was working on my M.A. at the U of Kentucky. Around that time, I started writing Broken Glass Waltzes – that’s right; it wasn’t a period piece when I started it. After that, a six-year stretch as a magazine editor and free-lance music critic in Cincinnati, and then I headed back toward fiction writing when I went to Ball State U for the doctorate, and since then during my time here at Newberry College. And of course, for most of that time, I was also writing songs for the bands I was in.


A: Nope. I’ve been playing drums since I was a pre-teen, and spent my high school years covering stuff like Judas Priest, Sabbath, and Krokus. Later, I got heavily into Michael Schenker’s work – my first “national” publication was a review of McAuley-Schenker’s Perfect Timing. The review ran in a spinoff of CREEM, which folded without ever paying me. Welcome to rock-and-roll journalism.


I still listen to metal a fair bit – I seem to have a weakness for Doom and Stoner Metal (which is weird, because I’ve never done drugs. I don’t even drink, although I have done that before.) A lot of the more recent cookie monster stuff doesn’t do that much for me. I listen to Sleep a lot these days, along with Trouble and Masters of Reality (the band, not the Sabbath album.) And of course, there’s always something to love from Alice Cooper.


Q: Where are some other places we can find your fiction?


A:  I just had a story come out at Out of the Gutter, and I have a couple at The American Culture. With luck, there may be more before too long.


Q: Writers get rejected a lot. Do you have any good


A: Well, while I was doing the M.A., I was also writing fiction, which I would send off to entirely inappropriate market s like the Atlantic and New Yorker. They, in turn, would bounce it so fast I’m pretty sure they had an editor waiting at my local post office. One afternoon I was at the University post office to collect my rejection slip, when I saw a cute young woman at the elevator. We struck up a conversation. We’ll have been married for twenty years this October. I’ll take a lot of rejections for an acceptance like that.


Q: You said you used to write SF and fantasy. How did

you get from there to crime fiction?


A: I started reading comic books shortly after I started walking, and so I grew up reading about Spider-Man, Batman, Superman, and the rest of the crew. On the one hand, that stuff is fantasy, but on the other, they’re typically fighting some kind of crime, so moving into detective fiction wasn’t a big stretch. I discovered Robert B. Parker through the Spenser: For Hire TV show, and my dad turned me on to Travis McGee and Shell Scott. Not long after that, I found a copy of Jim Thompson’s The Killer Inside Me, and that sealed the deal. I discovered I was more interested in writing “Will they get away with it”s instead of whodunits. A lot of my scholarly work has addressed the seductiveness of evil as well – my doctoral dissertation was on the Seven Deadly Sins in early English drama. Maybe I’m just morbid.


Q:  What’s your take on the rise of e-publishing and


A: Since I’ve been doing music for a long while, and was in college through a lot of the 80s and 90s, I got used to the indie-label and DIY  approach to rock and roll. In a lot of respects, I see what’s happening in publishing as being pretty similar. If you couldn’t find the music you wanted at the record store, then you started your own label. If you love a kind of fiction, poetry, or whatever, you launch a small press, because technology has made the process much more affordable. The upside is that this creates many more opportunities for people to get their work out there. The downside is that not all the work that gets out there is ready yet, or at all, and with so many small voices out there and an absence of promotional budgets, it’s easy to get lost in the shuffle and white noise. It’s still brutal to try to make a living doing music or fiction – there’s a reason I’m an English professor, after all. But anything that gives people a chance to be heard – even if it’s only by a few folks, even if you wind up a weekend warrior – I’m for, and I think a lot of writers probably feel that way, too. Sure, we think it would be great to make monster bucks with this stuff, and my main man Samuel Johnson famously said that no man but a blockhead ever wrote anything except for money. But when it gets down to it, you write because you think you have something worth saying, because you want somebody – anybody – to listen. The new technology gives our words a non-zero chance of being heard. That’s good. And remember – Samuel Johnson self-published as well.


Q: What do you look for in the stuff you read?


A: I want to hear a voice. If I can hear a voice, it means I’m going to care about the character, and that means I’m going to keep reading until I stop caring. I want things to happen. I want you to make me smile, laugh, shake my head, shudder, choke up – have some reaction other than “Oh, look, another novel/short/whatever.” If you can dazzle me with your gorgeous prose style, great, but if there isn’t a voice or passion there, then the technique doesn’t matter. A guitarist friend of mine was talking about Yngwie Malmsteen once. He said, “The first time you hear an Yngwie solo, you go ‘Wow!’ Then you hear the next solo, and you go, ‘Well, wow again… I guess.’” A shredding solo or brilliantly turned phrase will get my attention, but in the long run, it has to advance the song or the story. That’s why I’d rather listen to Ringo than to Mike Portnoy, and it’s why I’d rather read Louis L’Amour than Don DeLillo. (And besides, both Ringo and L’Amour have more chops than they get credit for.)


Q: Is there anything in the pipeline?


A: That’s a rather personal – oh! You mean writing. I hope so. I’m about 10,000 words into another story, under the working title A Safe Distance. We’ll see how it goes. And thanks for lending me this soapbox.
As for the interview, it's a cracker and I think that's the finest rejection story I've ever come across.  If you have one that comes close, let me know.