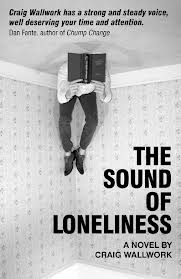 Before I hand over to Craig, I'd like to tell you about a submission opportunity for the follow up to Both Barrels from the wonderful Shotgun Honey team.  I was in the first and I'm hoping I'll find some inspiration to take a stab of getting in the second.  If you'd like to chance your arm, check out this link - you won't regret it if you do. It's going to be called RELOADED and following the link will tell you everything you need to know.

Other news is that I uploaded a new book at Amazon today.  It should become live some time tomorrow.  Essentially it's a sci-fi tale for young adults, children and adults alike and it carries (or is supposed to carry) a strong environmental message.  The cover I've cobbled together may not be exactly right, but I like it for now.

And here for you now is Craig Wallwork.  I've a huge amount of time for this guy and his writing and I've been trying to get hold of him for a long time.  If you like what you read, check out the links at the end of the piece; one of them will take you to an excellent short story that you can download for free.

A very warm welcome to you Craig.  Over to you...

Q: You seem to have arrived on the writing scene with a bang: a short story collection out last year, and two novels out at the beginning of 2013. Would you describe yourself as an overnight success?

A: Hell no. This short flurry of success is about ten years in the making. That’s the thing with these so-called overnight successes; people forget about the years leading up to that point and how they were filled with self-doubt, anger, rejection, late nights, exhaustion, and hopelessness. What everyone sees a moment of correlation that that is, metaphorically speaking, just a Band Aid hiding the scars of their endeavours.

Q: Your recent novel The Sound of Loneliness has been compared to Catcher in the Rye and the works of Dostoevsky and Thomas Bernhard. Not bad company to be in.

A: Yeah, it's nice to read, especially when it features names like Dostoevsky, and though I'm honoured that people have drawn such comparisons, it's important to understand that writing a story about a young man who is embittered and/or repulsed by society, and filled with angst, is going to end up being lumped with such books, and not necessarily a reflection on a book's strength. It's not to say my book isn't as good, or won't resonant through time like the others, but only that it is similar in subject matter. Such associations become the default response for people, like there is a NEED to make a comparison so you get a better understanding of what the story is about. You get it a lot in movies. For example: Inception is "like" The Matrix meets James Bond. Well, maybe, but it's tenuous.  For this reason, The Sound of Loneliness being hailed as this generation's Catcher in the Rye just because it shares certain themes is silly. As a writer friend pointed out to me, Holden was without aspirations and just sort of whining and wandering, whereas Daniel Crabtree had an overblown sense of purpose. Quite different. Nonetheless, it's very flattering people are linking great literary works with my own.

Q: You describe yourself as a filmmaker, artist and writer. Should we expect you to be directing an adaption of one of your novels in the near future, as well as designing the poster?

A: It would be nice to direct something, but I could never manage holding down a full time job and directing a movie. I’ve reached an age where keeping a roof over my head and food in my family’s stomachs is more important to me than chasing a dream. The poster design is more achievable with little to no impact on my normal life. I have done a few promotion posters for my novels in the past, and was instrumental in the artwork for The Sound of Loneliness. Maybe I’ll get more opportunities to flex my creative muscles in future works. Who knows.

Q: Your new novel To Die Upon a Kiss will be published by Snubnose Press on March 22. They're known for publishing hardboiled crime and noir novels. Is this a genre you're going to concentrate on?

A: I’m trying my best not to be pigeon-holed as a genre writer. I know a lot of authors who are keen to concentrate on one particular genre, to hone their skills and become revered in that chosen area. Like Nik Korpon. He writes these great little hard-boiled/noiry/pulpy-type stories and novels. And they work because he’s studied the masters of that genre. He knows the rules, the beat and the darkness that hides behind the curtain of literature. Me, I just fell into noir by accident. I can’t see myself writing anything akin to Chandler, or James M. Cain or Jim Thompson. Nik will.

A: It’s celebrating the successes of British authors, in particular those who have a “don’t give a fuck” attitude and push against the mainstream. It’s not discounting the achievements of British authors like David Mitchell, Jonathan Coe, Martin Amis, Will Self and Zadie Smith, to name a few of our venerated writers, but more pushing them to the side for a moment and allowing a new breed to come through. People like Tony O'Neill, Joe Dunthorne, and more edgy and fresh voices like Ray Banks, Tony Black, Jonny Gibbings, Ian Hough and of course, Nigel Bird. I hope someone is kind enough to include me among those great writers to, but at the moment I'm just happy to be a English writing, watching these great authors receiving critical success.

Q: The titles to two of your books, Quintessence of Dust and To Die Upon a Kiss, are lines taken from Shakespeare plays. Are you a big fan of the Bard?

A: I’ve read a few of his plays but nothing really sticks with me. That’s the literary equivalent of treason, right? I don’t care. He’s the master, sure, but I’d much rather read a book like the Suicide Shop by Jean Teulé than agonise over Shakespeare. The titles came about because they’re great for search engines.

Q: What's your favourite part of the writing process?

A: Making myself laugh, or being taken aback by the character's behaviour and how they change the plot dramatically.  Yes, I enjoy it when the characters surprise me.

Q: What's your least favourite part of the writing process?

Q: Do you have a daily writing routine?

A: No. I’m not that prescriptive. Sitting in front of the computer every day, trying to write; that’s not healthy for a writer. The only thing I do consistently everyday that is related to writing is to change my word of the day calendar. I have it on my desk at work. Every morning I get in, sit down, and tear off yesterday’s date. I then try my best to memorise that day’s word.  Today’s was Grand Guignol, meaning "dramatic entertainment featuring the gruesome or horrible".

Q: What is your big goal when it comes to your writing?

A: To be completely happy with what I’ve written. I have yet to achieve that goal.

Q: Do you consciously take risks on the page?
A: Calculated risks, yes. I don't go all out to shock, contrary to what people might think reading my work, especially my short stories. I just don't clip my wings. But I think without risks, a writer deprives themselves of possibility and adventure. Without risks, the writer is no different than the paraphrasing translator for the deaf.

Q: Have you ever written something and stopped, and thought, "Man, I don't know if I can put this out there." And then, did you anyway?

A: I was worried about one short story I wrote called Nazareth House. On the surface it could be misconstrued as a story about Jesus Christ having sex with an acrophobic woman. A lot of research went into the story and in particular the back history of the Incubus. But I know how these things work, and when the story was finished I read it over and thought, Yep, they’re just going to think I’m a blaspheming pervert that should burn in Hell! The magazine had reservations about publishing it, but did it anyway. I really admired them for that.

Q: Who is your favourite author, and if there was one question you could ask them, what would it be?

A: I don't have a favourite author. I have favourite books but the authors of those books are never consistent enough for me to want, or love, EVERY book they've written. I would like to share a cup of tea with Harper Lee. I wouldn't even talk about To Kill a Mockingbird. I would probably end up asking her why only one book, which is probably the question she gets asked the most, if you're lucky to ever be in the same room with her. The problem I have with authors in general is, I'm not that bothered or interested in them. I certainly don't want to know more about their books, like, what ever happened to the character etc. I met Fight Club author Chuck Palahniuk once in Leeds. I had no idea what to ask him, or talk to him about. So when it came to the part where he signed my books, and I had to engage in small talk, I asked him if he remembered doing a gig in the US and a guy named Chris. Chuck just looked at me like, Is that the best you can do?

Q: Tell me something you wouldn't want to admit publically.

A: I’m using my four year old daughter to help me learn how to read.  I know how to read, but I’m not very good at reading aloud. I realise that being an author means you may have to do a reading once in a while. The nights I take my daughter to bed, I read her a book and practice the delivery, pace and intonation. Julia Donaldson has been a real help in this too.

Craig Wallwork is the Pushcart nominated author of the novels The Sound of Loneliness (US) and To Die Upon a Kiss, and the short story collection Quintessence of Dust.(free from Smashwords). He is also the fiction editor of MenacingHedge Magazine. He lives in West Yorkshire, England, with his wife and daughter.
Posted by Nigel Bird at 15:59