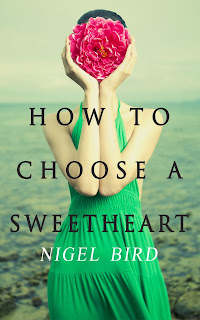 How can it happen? A writer who seems to exist in dark spaces turns out a romantic comedy? Surely it doesn’t make sense.


What can I tell you?


I could go on for a long time about the way this came about, but I’ll keep it fairly short.


This piece of work began around 20 years ago. Life was erratic and unstable, as was I. Having created a number of whirlwinds, I realised I had to survive the storm and one of the things that helped me was writing.


How To Choose A Sweetheart (US) began as something I hoped resembled a screenplay. I felt the idea behind the book was a great one and that I could do it some justice on my electric typewriter. I spent a long time working through it, a blessing in many ways as it helped me to stay out of the bookies when I gave up gambling the first time round. It also helped to soothe some of my hurt.


When it was finished, I gave it to a man who worked in films.  The way I had it, just like in many a romantic comedy, the guy would read it and the film would be made within months.


The truth was rather different. When I finally plucked up the courage to ask him what he thought he told me he’d lost it at some point after the reading the opening pages. However you look at it, there was nothing positive to find. Either he was telling the truth and hadn’t enjoyed the opening enough to care where he put the folder or he was lying to cover up the fact that he thought it was pure crap. I don’t suppose I’ll ever know.


As Deborah Faints, this has been hidden in a drawer for many years.


I dusted it off to send in for a TV competition called The Play’s The Thing (remember that?). I didn’t hear back from the programme makers, so I guess it didn’t work for them either.


Over my Easter holidays this year, I came across it again and started to read.


The thing is I loved it. The way it felt in my head and the way I could see it unfold.  Some of the lines were pure joy and the structure seemed perfect.


To cap it all off, my muse started shouting at me and I couldn’t avoid attempting to turn the work into a short novel.


Here it is then. How To Choose A Sweetheart.


Boy meets up with ex-girlfriend to see if there’s any mileage in their relationship. There isn’t, but he’s hopeful. Boy goes back to work in his bookshop. Girl walks in and pins up advert seeking piano lessons for her daughter. Boy decides he has to meet girl. He books himself piano lessons with the first teacher he speaks to and pretends to be a piano teacher in order to meet girl. Girl falls for boy. Boy falls for girl. Daughter comes out of shell.  But, oh the deception and the fear of revelation and....well, that would be telling.


The thing is, the book’s free today and over this weekend.


I don’t expect you to love it, but I’d hope you’d give it a try. In my eyes it’s romantic, moving and funny – I hope the rest of the world feels the same.


I’d put it as a clean cut mix of Clerks, Woody Allen and It’s A Wonderful Life (not that I’m choosing high bars or anything.


If you read it and love it, let me know. If you don’t, pretend you lost it on your kindle.