One Man's Opinion: BLOOD ON BLOOD by FRANK ZAFIRO and JIM WILSKY 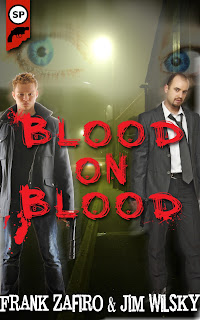 Gar’s a cynical, cold jailbird who’s dying in a prison hospital.  He’s hard and mean right up to the end.

Before leaving this world, he asks his doctor to set up a visit from his 2 sons so that he can rest in a kind of peace.

His sons are an interesting pair and they can prove or disprove nature-nurture theories in any way you like, given that they were born to different mothers.

Mick is the Irish son, Jerzy is the Pole.  Mick was once a cop and might have a soft side well hidden somewhere, but in truth the pair are just about as stubborn, brutal and mean as their father.

When they are reunited in the hospital it’s the first time they’ve seen each other in many years.

Gar gives them a mission that will force them together for a short while.  Is he intending to bring his progeny back to the glory days of youth in a Coupe-De-Ville style journey as his final act?  That would be a noble final act from any man, I’d say.

Thankfully, the 2 men have little on their plate other than a turf war assassination and a competition where they’re both fishing for the heart (and body) of the beautiful Ania.

All the strands fizz and eventually the fuses blow to ignite a dynamite ending.

Explosive and engaging right from the off and another success for the gritty and blossoming Snubnose Press.