One Man's Opinion: HELL ON CHURCH STREET by JAKE HINKSON 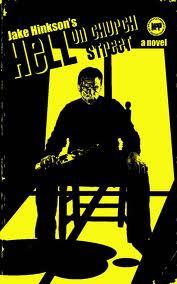 I’m swimming against a big tide on this one.  Not against the tide exactly, more across it.  Hell On Church Street (US) has a mass of excellent reviews and it may well be that they offer a more rounded opinion than I can.


I did enjoy the read and think the idea for the story is really strong.  A tough man, down on his luck, returns to crime to support himself.  He waits patiently for a soft target and finds him in a flabby slob with poor personal hygiene.  He takes the slob to his car and they drive off, the slob with a gun to his head.  Tables are turned when the driver put his foot to the floor and keeps it there.  It turns out that the soft target is only soft on the outside and we hear his very dark story as they drive along.


Geoffrey Webb’s the name of the driver.  He was a non-descript student who saw an opportunity to use his intelligence to take up and exploit a position in the church.  He becomes a youth minister, but falls in love with the minister’s daughter and a catalogue of disasters ensues.  There’s no doubt about it, it’s dark, edgy and well written.


My overriding feeling is that it’s the relationship between the 2 men in the opening and closing scenes that held most of my interest.  Hinkson’s twist is really smart.  For that reason, I’d have preferred it if the central piece (the bulk of the tale) had been trimmed and feel that this would have made an outstanding short story of decent length rather than a good novel the way things are.  I see it like a sandwich where the meat’s on the outside and the bread’s in the middle, if you can imagine such a thing.


Yes, it’s pretty good and I liked it.  I’d recommend it as a read and feel that the weight of opinion in its favour amplifies that thought tenfold.