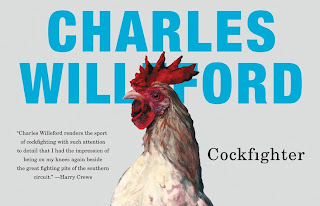 Books like Cockfighter (US) remind me of how I came to love literature in the first place.  It offers a wonderful sense of being transported to an entirely different place, seeing the world through the eyes of others and then ensuring that I’m so captivated by a series of events that all I want to do in life at a given moment (well, most given moments) is return to the next page.


The quote at the beginning of the book is from Ezra Pound – “What matters is not the idea a man holds, but the depth at which he holds it.”  There’s plenty of depth in evidence here as protagonist Frank takes the reader into the life of a serious cockfighter.


Frank is such a passionate man that he’s vowed, unbeknownst to anyone else, to remain silent until he gains the coveted mark of respect that is the silver medal that marks someone out as the cock handler of the year (sniggers really don’t fit on this occasion!). He explains himself a little here:


‘No one, other than myself, knew about my vow, and I could have broken it at any time without losing face.  But I would know, and I had to shave every day.”


That last phrase is the kind of poetic turn that give the story an extra edge – Willeford allows his character to tell his tale without relying on the mundane.


When we meet Frank, he’s on the cusp of losing everything – his money, his last fighting bird, his car and his trailer home – on one fight with an old adversary.  It’s a hugely dramatic opening and, at risk of spoiling that drama (look away now) it ends up with Frank leaving the pit with only $10, a coop, a few clothes and a guitar.


Given a lift by an old friend who has been forced to retire, he’s offered the chance to buy the perfect bird, Icarus, for the hugely inflated sum of $500.  Frank has a choice – to promise to buy the bird or to give up the game and return home to marry his patient, conservative fiancée.  Frank’s passion means there’s only one option and he sets off to find the money he needs.


What follows is the engrossing sequence of events that will lead up to Frank having the chance to make his personal dream come true.


Cockfighter reads like a novel from the depression era, but is set in the 1960s.  In some ways, it points to the hangover of values that are old-fashioned in ways that might be seen as good and bad.  Frank has his own mixture of values, and his own liberal(ish) views are often contradicted by his animal self or by society.  Race and gender are particular areas of interest here.


He holds strong opinions on the nature of work and the illusions created by a capitalist society.  When looking for a job, he comments:


‘The majority of the situations that were open in the agate columns were for salesmen.  And a man who can’t talk can’t sell anything.’


Or on bigger dreams:


‘I liked the man for what he was and respected him for what he was trying to be.  But unlike me, Doc lived with a dream that was practically unattainable.  All I wanted to be was the best cockfighter who had ever lived.  Doc, who had already reached his late fifties, wanted to be a big time capitalist and financier.’


The series of adventures in the book are brilliantly told.  There’s a wonderful use of dramatic tension which left me hungry to find out what would happen next.  When the final full stop was reached, my appetite was entirely satisfied.


Here’s a book the likes of which I wish I could write myself. Given the talent on show and my own limitations that’s very unlikely, but just like Frank I don’t see the harm in setting such a high goal. Maybe I should take a vow of silence; if nothing else I suspect my wife and colleagues would be happier that way.