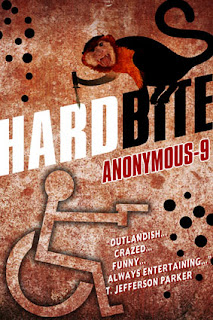 The main thrust of Hard Bite (US) is a brilliant conception – the victim of a hit-and-run accident (Dean Drayhart) loses his daughter and his ability to move and sets out on a mission to avenge any victims of hit-and-runs.

Of course, it takes more than a great concept to make a great book, but Anonymous-9 has pulled this off with a good deal of skill to get the most from her initial idea.

Drayhart’s accomplice is a monkey (Sid) who has been trained to kill.  As well as being a killer, Sid is also a big help around the house and is an assistant driver.

Their first victim happens to be seriously involved with the Mexican mafia and his connection to the cartels seriously thickens the plot.  The other aspect of the novel, and the aspect I think I enjoyed the most, is the local sheriff on the case, one Doug Coltson. Coltson’s in charge of putting together the pieces from a number of investigations.  He’s a fantastic creation and I hope he might feature in future novels.

The whole read is one of adventure and entertainment.  There’s plenty of humour, violence and action to engage a reader, as well as a sensitive handling of characters that makes them ever-so human (even Sid).

This one’s a real pleasure and it’s a must for anyone looking for something that doesn’t do the reader the disservice of simply joining up the dots or finding the lowest common denominator.

ps As well as being available in kindle from from Blasted Heath, you can also get a paperback copy (published by New Pulp Press) via US and UK links.
Posted by Nigel Bird at 11:06