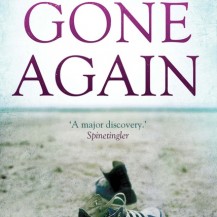 Having thoroughly enjoyed a couple of crackers by Doug Johnstone in the form of Hit And Run and Smokeheads, I was pretty excited about Gone Again.

Unfortunately for me, I didn’t get quite the same feeling about this book.

Hit And Run and Smokeheads grabbed me from the off.  They land smack in the middle of the action and never let up.

Gone Again has a rather different feel.

It’s a much gentler start and, even though the situation of a woman going missing while husband and child try to cope without her has lots of dramatic implications, I didn’t really feel them.

Mark Douglas finds himself in a difficult position with just about everyone when he realises his wife has disappeared.  He’s at odds with the school, his wife’s colleagues, his mother-in-law, his son and the police. As things become clearer and the plot thickens the tension builds to some extent.

All the ingredients of a thrilling read are there and I’m not sure why I didn’t really get involved with the characters or their situation.

The opening concentrates on the domestic setting.  It’s well done in the sense that it’s pretty realistic, but that might be one of the issues.  The dialogue between father and son and the things that happen are so ‘real’ that they lack a little something for me.  The thoughts of Mark as a father are thoughts I’ve had and the pressures of parenting are all-too-familiar.

This one also has a little more fat that the lean prose I’ve become used to.  It’s a little diluted in some way, so the flavours weren’t strong.

There was enough in the story to keep me going to the end as I did want to find out what had happened and I’m glad I stuck at it.  It does all become more active and interesting, yet I still wasn’t fully there.

I wouldn’t want to put anyone off reading this, though.  I know the author can work magic and just because it didn’t happen for me here doesn’t mean it won’t work for you.

If you’re put off by this review, try one of the others I mention.  If you’re not, try them anyway and you’ll have a treat in store when you get to them.

Sadly, for Gone Again, I feel it was me who was missing in action.
Posted by Nigel Bird at 11:33