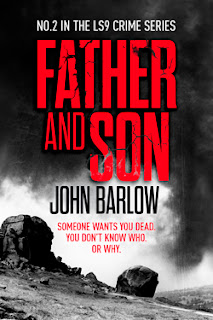 One of the nice things about the Dancing With Myself series is that it may have contributed to helping authors take steps into the world of selling their books. Ideally, everyone who appeared here will go on to bigger and better things.  Here's an interview by John Barlow who has certainly moved up a notch or two in terms of his reputation.

So, what have you been up to since the last interview?


The last time I was here I was publicising my first crime novel, HOPE ROAD. Now I’m back with FATHER AND SON, the second in the same series.


Which you self-publish, right? How has that been?


Well, a few months after HOPE ROAD came out I had begun to believe that choosing the ‘indie’ route was a terrible mistake. The novel wasn’t selling very well, and it all seemed to be a bit of a waste of time.


Yet here you are with the second novel in the series. What changed?


HOPE ROAD began to sell. Slowly at first, but with a few sudden bursts. Without ever becoming a #1 bestseller, sales crept slowly up to a (very modest) five figures. So that gave me some encouragement to finish the second book in the series.


I am. The book has done best of all in the US, which seems strange to me, given that it is set in Leeds, a city which isn’t very well known in the US, and which has very little pedigree as a setting for crime fiction.


And Leeds is the setting for book two?


Yes. FATHER AND SON is a free-standing novel, but it does pick up more or less where HOPE ROAD left off. It’s more thriller-ish and tighter overall, I’d say.

Very good. And once again, it has been doing better in the US so far. A novel set in Leeds? I just don’t understand it...


I dunno. It’s still fun to do it all yourself, the covers, setting the price, etc. Indeed, I’ve managed to get some e-rights back off publishers and re-launch some of my previous books, both in English and Spanish. But it’s a lot of work, and the market for self-published ebooks is changing fast, not always for the better as far as indies are concerned. So, I’m still not completely sure.


But if you continue with this series, it will be self-published?


Yes, for the minute.


Anything else in the pipeline?


Quite a lot of reviews of HOPE ROAD mentioned how televisual/filmic it was. I asked a couple of scriptwriters I know about how to get a script done, and they shrugged and said, do it yourself, as if this was the simplest thing in the world. So that’s my next project. It’s extremely simple, apparently :)


Amazon Select: got an opinion?


My ebooks are currently all in the Select program, which means they are exclusive to Amazon. But here’s a compromise:


If you buy one of my ebooks from Amazon, you can forward the purchase email to me (email available on my www site) and I’ll send you an ePub version, or whatever format you need. Amazon are happy with this arrangement.


Also, I will gradually be taking my books out of Select and getting them into Kobo, Apple, Sony etc. The advantage of being exclusive to Amazon seems to have dwindled almost to nothing.


You are still based in Spain. Do you miss England?


John Barlow’s second novel set in Leeds, FATHER AND SON, is out now: