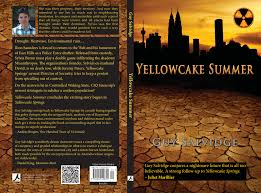 What’s this ‘Yellowcake’ business? You mean yellowcake as in uranium?

Indeed. Yellowcake Summer is a dystopian novel set in Western Australia around fifty years from now. In it, a Chinese company called CIQ Sinocorp has bought up a vast tract of the state and set up a nuclear reactor town, Yellowcake Springs, there. The region has been deemed a ‘Protectorate’ not subject to Australian law, and not everyone is happy with that.

It is. The first novel, Yellowcake Springs, won an Australian competition called IP Picks and was subsequently published by IP in 2011. The novel was later shortlisted for the Norma K Hemming Award in 2012. 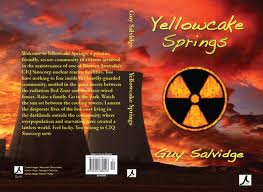 Right. So what happens in Yellowcake Springs?

In Yellowcake Springs, we follow the lives of three people in vastly different situations in the year 2058. Sylvia Baron is an advertising rep living an affluent life in Yellowcake Springs. Rion is a vagrant from the ‘Belt town of East Hills, trying to scrape out a living. Jiang Wei is a young Chinese man recruited by CIQ Sinocorp to work at Yellowcake Springs. The lives of all three become intertwined partly through the use of Controlled Dreaming State, a sort of advanced virtual reality. Sylvia’s husband heads up a secret environmental (or ‘mental) group known as Misanthropos and the group stages an attack on the reactor complex.


Sounds dicey. So what happens in Yellowcake Summer?

By the time of Yellowcake Summer, three years have passed since the events of the first book. Sylvia Baron is getting out of prison for something that happened in the first book, Rion is about to be conscripted into something called the Civilian Police Force, and our third viewpoint character Jeremy Peters is about to be promoted to Director of Security of Yellowcake Springs.


Am I going to have to wait for Yellowcake Winter to find out how it all ends?

Tempting title, but no. The story is complete in two volumes.


Got anything else coming out, an anthology of post-apocalyptic noir perhaps?

As a matter of fact, yes! A couple of years ago, I read a novel called Tobacco-Stained Mountain Goat by an ex-pat Aussie called Andrez Bergen. Mad book, a mish-mash of detective and science fiction. Lots of fun. Anyway, I wrote a review of that and Andrez ended up inviting me to write a story for something he was putting together called The Tobacco-Stained Sky: An Anthology ofPost-Apocalyptic Noir. 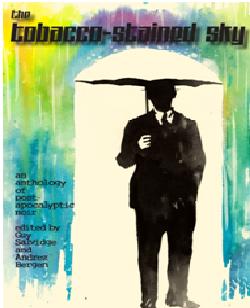 I can’t help but see your name on the front cover there. Am I blind?

No, what happened was that the whole project was crying out for someone to edit the prose fiction. Someone innovative, someone handsome, someone –

Fantastic book. It has some amazingly entertaining and well written stories in it by people like Josh Stallings, Chad Eagleton, Julie Morrigan and Nigel Bird. Plus a whole bunch of comics, artworks, you name it. The Tobacco-Stained Sky will be out very soon, on August 26th.


So you managed to get a short story published in an anthology that you edited? *slow hand clap*

Wait a minute, I had the story in there before –


Never mind. I take it you have some other stories doing the rounds, then?

My story in The Tobacco-Stained Sky, “The Dying Rain”, turned out to be the first in a series of stories featuring Tyler Bramble, a Seeker living in post-apocalyptic Melbourne. These stories are in the Tobacco-Stained Mountain Goat universe. The second Tyler Bramble story, “Blue Swirls”, was published in a new Australian magazine called Tincture Journal and will shortly be featured in the second issue of Canadian anthology, Warpaint. I’ve written a third Tyler Bramble story, “A Void”, which might come out sometime next year, with a bit of luck.

No-o. I had a story, “The Last First”, in Another Sky Press’ Alien Sky anthology earlier this year. 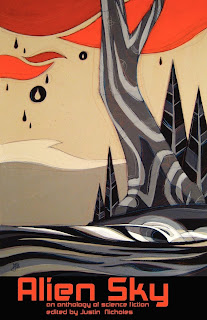 Wait, you didn’t edit that as well, did you?

No, it was edited by a very nice man named Justin Nicholes. We aren’t even related.


Working on something else, are you?

Right now I’m writing a crime fiction novel called Dan: A Cautionary Tale. Earlier this year I was lucky enough to be selected as a Writer-in-Residence at the KSP Writers’ Centre in Perth, so I had four solid weeks to make a start on the novel. I’m about half way through.


So you write full time, do you? Raking in the big bucks just like F. Scott Fitzgerald?

Um, not quite. I have a day job, of sorts. You know, teaching high school English and all that.


But you’ll be able to give that away soon, won’t you? Just as soon as Yellowcake Summer hits the big time like that crime novel by that guy who turned out to be that lady, what’s her name?