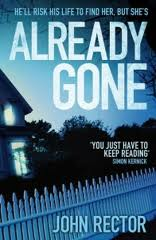 One of my favourite life-changing incidents in books is in Kafka’s Metamorphosis.  Guy wakes up and he’s a beetle.  Genius.

There’s a great life-changer in Already Gone (US). Guy (Jake Reese) comes out of a bar, has his finger snipped off by a couple of thugs.

A few days later, the finger’s sent in the post which dispels any theories of him being a case of mistaken identity or random violence.

Jake is driven to find her and the likely abductors at any costs and he’s even prepared to return to his old connection and surrogate father, Gabby, to get the job done.  Gabby’s an old time crook who has long arms and lives in a disused crematorium with a group of very loyal followers, ex-street kids, who will protect him in any way they can.

This is gripping stuff, especially the first half.

That mention of Kafka as my opening wasn’t accidental.  Part 1 of this book is not unlike the great man’s work. There seems to be no reason for the attack on Jake. There’s nothing to explain why he should be victimised in the way he is. More to the point, there’s no one to kick against. All the information is so fractured, in terms of his memories, his wife, the police et al, that it’s practically a living hell.  At times, the uncertainty and the unfairness of it all had me feeling physically sick.  Jake’s world is spinning out of control and the string-pullers are totally invisible.

That first part, then, is as good as it gets.

In it, the action takes over and the pieces of the puzzle are put into place one by one.  The mood is always intense and the plot remains gripping.

To my mind, the second part lacks the power of the first, possibly because that fractured whole is so unsettling and that the more certainty creeps in the less intense the story becomes.

There’s also an issue in that Rector really does stretch the motives and passions of Jake until they’re wafer thin.  Faced with some of the evidence as it arrives, I think I’d have jumped ship way before the climax.

It’s a very good read and you do ‘just have to keep reading’ as it says on the cover.
Posted by Nigel Bird at 11:28