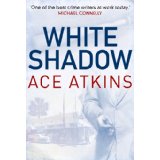 White Shadow (US) is quite something.


It’s a novel that fictionalises events from the 1950s in Cuba and Florida, where old mobster Charlie Wall has his throat opened, which in turns opens a can of enormous worms.


There’s an introduction that is a little daunting, given the number of names that fly out in quick succession, but don’t let that put you off if that’s what you pick up with the sample.  When the fiction begins it’s clear that there’s a treat in store.


The story is told through 4 central characters and each of them has a cracking tale to tell.  There’s a hard-nosed and straight detective, a wet-behind-the-ears journalist of the old-school, there’s a woman who is a Cuban revolutionary and there’s a rather scary gangster.


These people offer an intensely nostalgic flavour for the period, one I really enjoyed:


‘Joe Antinori had been gunned down not that long ago and now there was Charlie Wall, and you knew that Dunn was wondering if the war wasn’t starting to heat back up. The words to the music had changed – the Andrews Sisters were now Tennessee Ernie Floyd – but turf wars would never leave a city that refused to be civilised.’


As the story unfolds, Atkins throws figures we may all know: George Raft (‘”Easy come, easy go,” George Raft said. “I made 10 million in my life. Spent it all on gambling, booze and women. The rest I can spend foolishly.”’), Batista, Castro, Lucky Luciano and Bugsy Siegel. These inclusions pepper the mix of mobsters and police really well and bring in an extra dimension that helps to remind one of the factual foundations to this from time to time.


There are a lot of strands to the story as the cops chase killers and the killers get busy being nervous about what Charlie Wall may or may not have said to reporters just before he died. Atkins does a sterling job of weaving and binding these all together, all the while keeping the flavours of the hot and buzzing city to the fore.


Ace Atkins takes great care in the setting up of every scene with vivid description of people and place and this is one of the marks of the quality of the work.


He also maintains a pleasing hard-boiled edge to it all.


‘When a woman hurts you in that kind of way, it’s not something you can really scrape to the side of your plate for later digestion, but instead becomes an ill, spicy thing that feeds into your head until you get that tenth whisky sour in your and perhaps roam the streets until you sober up enough to drive home.’


There’s also plenty of the romance, squalor, sordid behaviour, contradiction , danger and violence that you might want to find in an old noir movie; the book does have a strong visual feel to it and would make a great film.


Of all the strands, my favourite is the Detective Ed Dodge. He’s a cop who seems to have more about his real life adventures than many fictional characters could lay claim to.


This one’s a brilliant, slow read that needs to be appreciated and won’t let itself be rushed. If I have a reservation, it’s related to the length and density of the book, but the real events most likely require such detail and breadth.  That said, it’s a book with a great deal of quality that shines a very bright light into a very dingy pool.