One Man's Opinion - THE BITCH by LES EDGERTON 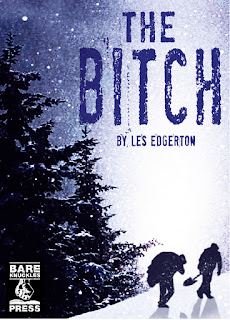 
Jake’s been inside.  Twice.  One more conviction and he’s going away for good.


Fortunately for Jake, he’s sick of prison life and has decided to go straight.


He’s been to college to better himself and has even built a reputation as a hair-stylist that’s good enough for him to set up his own salon.   I love this incongruity – big, bad Jake with his blood-stained hands chopping away at a perm.


And he’s met a woman too.  Paris.  Beautiful, sexy, smart and about to have Jake’s baby.   Looks like he’s hit the jackpot, no?


Thing is, Jake doesn’t know his stories.  Paris was the guy who did it for Troy.  A name like that and maybe he should have sensed that his bed-of-roses might be full of thorns.


‘It all began with a phone call.’


The first thorn appears in the form of Walker Joy, one-time cellmate and saviour.


Walker’s in big trouble.  He owes big money to big crooks.  One job will see him safe.  All he needs is a break in man.


Of course, Jake’s not having any of it.  He knows which side his bread is buttered.


Problem is Walker has a few aces up his sleeve and Jake knows he’s screwed.  It’s enough to drive an alcoholic to drink.  Really.


From there on in the story unfolds.  Jake is reeled in like a prize-fish on the end of the line, all the while knowing that he’s  got a hook right up his ass.  He’s not a bad bloke, you see.  Or at least his heart’s in the right place.  Circumstance has him by the short-and-curlies and no matter how he examines the angles, he’s lined up for the corner pocket.


At every point of the story where a ray of hope appears, the world conspires against him and as every chapter comes to a close, the need to read on grows stronger.


It’s a well-told tale.  I found it hard not to feel for Jake.  If it were a film or a play, it would be the kind that would have you shouting out for him to get the hell out of there.  ‘He’s behind yer!’  and  ‘He’s still behind yer!’


On the whole, the plot is very much in the present and is all the more uncomfortable for that.  It’s punctuated by prison stories and tales from Jake’s past that should possibly have made me think less of the man; instead it had the opposite effect.


Well paced, engaging and very entertaining, it’s like one of the small diamonds in the collection Jake is aiming to steal.


The ending is perfectly weighted.  Sits on top of the story like the bowler hat on a dapper gent, a hat that needs to be doffed every time Les Edgerton approaches.