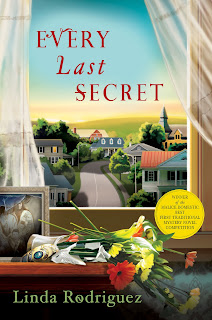 There's been a big slash in the price of Kuboa titles, so it' s well worth taking a look.  The tree-book version of Dirty Old Town (and other stories) is now only $2.95, which is fantastic.

And don't forget that gem of a collection from Chris Rhatigan, Watch You Drown.

Now, over from Minotaur books and dancing with herself, the one-and-only Linda Rodriguez.  A big Sea Minor welcome if you will.

In Linda Rodriguez’s Every Last Secret: A Mystery, half-Cherokee Marquitta “Skeet” Bannion fled a city police force and family entanglements for a Missouri college town as chief of campus police. Now, the on-campus murder of the student newspaper editor puts Skeet on the trail of a killer who will do anything to keep a dangerous secret from being exposed, and everywhere she turns she uncovers hidden sins. Time is running out as Skeet struggles to catch the murderer and prevent more deaths by unraveling every last secret.


“Every Last Secret offers that rare and startling thing in the universe of thrillers: a truly fresh voice.”   —Jacquelyn Mitchard, #1 national bestselling author of The Deep End of the Ocean


“There's a new cop in town and she has smarts, courage, and a good heart. Mystery readers will find a new favorite in Chief Skeet Bannion.”  --Nancy Pickard, author of The Scent of Rain and Lightning


“Murder on a college campus, plenty of bad people, and all kinds of puzzles to solve.  Linda Rodriguez has written a highly enjoyable procedural introducing a rough and tender heroine, Skeet Bannion.”--Kathleen George, author of The Odds and Hideout


1)      So what are you doing in this series of interviews on crime writers? You’re a poet, not a crime writer.


My first crime novel is being published by St. Martin’s Press/Minotaur Books in April 2012. Every Last Secret: A Mystery won the Malice Domestic First Traditional Mystery Novel Competition. I’ve finished the sequel and am starting the third novel in the series. Oh, and I have a short story, “The Good Neighbor,” coming out in the anthology, Kansas City Noir, so I think all that makes me a crime writer.


2)      You’ve moved from writing poetry to mysteries. Doesn’t it bother you, coming from literary circles, that you’re writing genre? You’ll never be able to write poetry again now that you’ve strayed, will you?


The short answer to that is no, it doesn’t bother me. This is a question I get asked in person quite a bit. It implies, of course, that genre novels are a lesser form of writing. I don’t believe that. I think many mystery/thriller writers and science fiction/fantasy writers are writing brilliant books with a great love of language, strong characters, and real attention to some of the key societal issues of today. I have a Literary Mystery Novelists series on my blog, www.lindarodriguezwrites.blogspot.com, that showcases many of these writers in the mystery/thriller field. Also, I still write poetry and will continue to do so, just as I’ll continue to write mystery novels. I’ve never seen it as an either/or situation.


3)      What made you decide to write a book with a campus police chief as the protagonist fighting corrupt administrators to solve a murder on campus that they’d rather have covered up? You did it because of all the news stories lately about campus crimes and cover-ups and violence on campus, didn’t you? Just trying to cash in, right?

I wanted to have a heroine who would have a reason for investigating crimes (other than just being nosy) and would be experienced with guns and physical combat without writing an urban police procedural. I knew quite well that most larger colleges have their own police forces consisting of commissioned officers who have gone through police academy and often have years of experience on metropolitan police forces. Thus, Skeet Bannion came to be.


4)      This Brewster, Missouri, town you write about with Chouteau University in Every Last Secret, what town and college are you really writing about? Give us the lowdown on who’s dirty and where the bodies are buried. This is really just a juicy memoir, isn’t it? You’re pulling a James Frey in reverse, right?

Wrong! There are a lot of small towns right around Kansas City, Missouri, where I live. Some are college towns, and some of these small towns have the old-fashioned courthouse square structure (of which I’m a great fan). So I made Brewster a college town and gave it a courthouse square. Some of these towns are right on either the Missouri River or the Kansas (Kaw) River, so I set my town of Brewster right next to the Missouri River, which is one of America’s great rivers. I combined some of the most interesting aspects of these towns for Brewster, and I combined some of the most interesting aspects of colleges and universities in this area for Chouteau University. I spent years as an administrator at a local university, and I didn’t want people thinking Every Last Secret was just a roman á clef and trying to see which character was really who in real life. With a fictional town and university, it’s easier for readers to realize the book is pure imagination.


5)      Traditional mystery, small town—is this one of those cozies? With a cat who detects?


I guess you might call it that, though Skeet is a little harder-edged than your usual cozy heroine. She spent years as a cop with the Kansas City Police Department, much of it in Homicide. And Kansas City is a big murder town with lots of gang violence. Skeet came to this small town looking for a peaceful life, but small towns are really idyllic only on the surface. They have their own tawdry crimes and secret corruption hiding in the depths. Not to mention the spillover from the nearby city.


She does have a cat, Wilma Mankiller, named after the great Cherokee principal chief, a hero of Skeet’s and mine. Wilma, the cat, doesn’t talk or detect or do much of anything except regular cat things, though. There is another cat in the book, Cernunnos, whose owner thinks he spends his days meditating, but Skeet just thinks he spends his days in a stupor from overeating. Sorry, no cat-detecting. 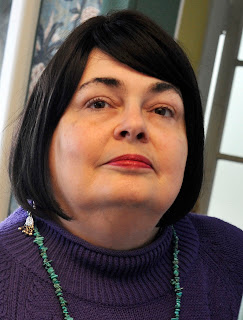 6)      Why do you think mysteries and thrillers have become so popular recently?


The standard answer, I believe, is the desire to see order restored, and I’m sure that’s right—as far as it goes. I think there’s more to it, though. Mysteries are about the relationships among people and about the impact that violence has on those people and those relationships. Also, the crime fiction field is examining parts of our society and issues within our society that other areas of fiction ignore. Put those factors together with a large number of talented writers, and you have all the makings of a boom.


7)      You write and publish poetry and novels but not a lot of short stories. Why is that?


The short story form comes very hard for me. Usually, the moment I start writing, the characters and situation start to grow, and before I know it, I’ve got something that wants to be a novel. I’m in awe of those who toss off multiple short stories every few months. It’s a form I’m interested in working with more in the future, though.  I love a challenge, and writing good short stories is very challenging.


8)      Everyone knows publishing is going through a huge, messy transition right now. Are e-books going to wipe out paper books? Will self-publishing and Amazon destroy publishing as we know it? On and on ad nauseum.


First, you must look at the real data behind all the headlines and overdramatic hype. E-books are currently only 20% of total publishing sales, and their spectacular rate of growth has slowed.  Will they continue to grow as a portion of all publishing sales? Yes. Will they wipe out the physical book entirely, except for rare collectibles? Anything’s possible, but I don’t see that happening in the next couple of decades.


Every time some new technology comes along, people leap at the chance to shout the end of the book. Radio, movies, television, VCRs, all of these things were supposed to spell the end of the book. Guess what? The book’s still going strong. Paperbacks were supposed to spell the end of the hardcover book. Yet more hardcovers were published last year than were ever published in any year before the paperback book came out. I think the mass-market paperback book may actually be in some real trouble. Perhaps the e-book will completely replace the mass-market paperback. But no, I don’t see the end of the book anywhere in sight. People will always need and want stories, and right now the book (paper or e-) is still the best way to experience and re-experience stories whenever we want them.


9)      You have published award-winning poetry books, an award-winning mystery book, and a cookbook that’s been a steady seller since 2008. Usually, writers tend to specialize. Why don’t you? ADHD? Short span of attention? Is that you just can’t resist shiny objects?


You are cruel. I prefer to say I have a broad range of interests. It’s why I’m never bored.


10)  What are you working on now and for the future? Or will you just be a one-book wonder?

Every Last Secret is the first of a series, and I’ve finished the second book in that series, Every Broken Trust, so I’ll be writing the Skeet Bannion books for some time, and I’m excited about the overall narrative arc of those books and Skeet’s development within them. I have another mystery series in mind that I’m eager to write, as well. I’d be interested one day in turning my hand to a historical mystery, and I could see myself eventually writing some urban fantasy (but probably not vampires, especially if they sparkle). Then there’s this big, complex novel about the Vietnam War at home and abroad that I’ve long wanted to write. I’m not likely to run out of book projects any time soon.


Thank you so much for having me here on Sea Minor, Nigel. I hope you’ll all visit me at www.LindaRodriguezWrites.blogspot.com and check out Every Last Secret at your local bookstore or Barnes & Noble or at http://www.amazon.com/Every-Last-Secret-Linda-Rodriguez/dp/1250005450.
Posted by Nigel Bird at 19:23