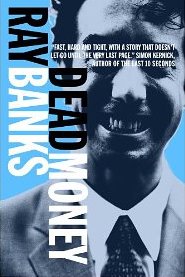 I was absolutely thrilled a couple of days ago to find that Smoke has been short-listed for Spinetingler's 'Best Novella' award and even more thrilled when I saw the company I was keeping in the rest of the list.

The response to the book has been overwhelming, which has come a something of a surprise.  When I sent it over to Trestle Press, I really had no sense of its merits.  Maybe I'd been living too closely to it for too long to be able to find any perspective on it whatsoever.

If you read it and enjoyed it, I'd be honoured if you took the time to pop over and consider voting.

If you haven't read it and would like to, it's not too late to pick up a copy and form an opinion (it might help that if you follow the Trestle Press link here you'll find out how to get a buy-one-get-one-free deal).  Needless to say, that goes for the other books in the list, too.  Votes are being taken until the end of the month.

I'd also like to thank and praise Brian Lindenmuth for setting up this category in the first place.  It would appear that novellas are thriving just now and I'd like to celebrate that fact.  Great work Spinetingler.

Allan Guthrie's 'Savage Night' is now available in Kindle.  It's going for the paltry sum of 99p in the UK and $1:54 in the US.

Here's a little about it if you don't already know:

"Guthrie's work stands up against the best the genre has to offer. His prose is clinically efficient, his storytelling consummate, his dialogue sparkles and snaps on the page, and his blend of black humour and breathless action is impossible to put down." The Herald

"A black comedy akin to the work of Christopher Brookmyre and Douglas Lindsay... If you have a robust sense of humour, you'll love this." The Observer

"Guthrie twists the plot, chops up the timeframe, and toys with point-of-view… never a dull moment." Booklist

"The best noir writer in the country...easily the match for America's finest in the genre." The Scotsman

And so to Dead Money by Ray Banks, published by Blasted Heath.


When I first became a teacher I was going to change the world.  I looked around scathingly at my older colleagues with their crumbling enthusiasm and veneer of bitterness.  I vowed to myself that I’d never be like them.  Never.


Nowadays I should be apologising to my younger self.  At the same time, I might like to explain that getting older isn’t what it seems from the perspective of youth.  It does things to you.  What I didn’t understand then is that experience can step in where energy once used to be, making things simply different and only slightly less good for the pupils.


Alan Slater might have been like the young me once, Les Beale being his older colleague.   Les became Alan’s role-model in the techniques of selling double-glazing and then hit the bottle, the gambling tables and the skids in fairly quick succession.


Alan observes Les’s decline from close quarters, though he’s no intention of heading down the plug-hole in the same way as his wayward mate.


Thing is, as Les is a big fellow he has a powerful gravity and it’s impossible for Alan to get out of his orbit.  When a gambling-fix goes wrong and Alan’s called in to clean up the mess, his life really does begin to tumble.  What’s worse for Alan is that rather than being a pale image of the bigoted, arrogant and violent Les, he’s actually got a darker core that easily surpasses that of his master.


As we follow Alan’s attempts to keep control of his wife, dog, home, drinking problem, job and lover, we witness his satellite falling back to earth.


The book’s set in Manchester.  It’s not the Manchester of Victorian splendour or the sterile Arndale centre, but the dingy world of mill-town terraces and rot.


Mixing the sharply angled panoramas with the down-sides of gambling, booze and the predatory instincts of the salesman, Banks gives a wonderful cocktail of noir sensibilities to be enjoyed.


The scenes, particularly the casino and the pub settings, are wonderfully set.  He doesn’t miss a trick when painting a backdrop, nor does he add unnecessary weight.


The gambling routines are described with relish by Banks, a man who’s worked under the half-lights himself and clearly knows the ropes.


The first person narrative cracks along and as a reader I was completely absorbed in the tale.


To my mind there’s not a nice character in the book.  There’s not a redeeming feature on show, not in the sales team, the gamblers, the police, the students, the women in Alan’s life of the clients.  That makes the way the book remains engrossing all the more of an achievement.


There’s something reminiscent of the black-and-white toughness of the British flicks of the late fifties and early sixties, the Saturday Night and Sunday Morning hues washed over the twenty-first century setting.


Lowry painted a lot in Manchester.  Working scenes of movement and depression.  If he were painting Dead Money, far more of the matchstick men would have been lying on the pavement, throwing up, bleeding or fending off a gang of attackers.


A hugely enjoyable piece of work.
Posted by Nigel Bird at 10:17