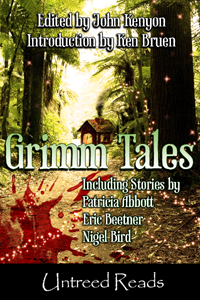 Have you had your broth today?  If not, you should definitely go and get some.  #broth is short for Brilliant Reads On The Heath and it should definitely be added to your favourites.  It's another great innovation from Blasted Heath.

Today's interview is with the lovable and talented authors, Jack Bates.  Not only is he talented, but he has generosity in spades.  Give him some love as he tells us about Grimm Tales.

1. How did you squeeze in with all these other talented writers?

Dude, I don't know. I read Patti Abbott's blog and respond to her posts. About a year ago Chris Rhatigan invited me to join Crime Fiction Writers after he reviewed my Derringer nominated story, Broken Down on the Bonneville Flats. Nigel here drops me a line every now and then so I'm sure I heard of it that way. Also, I've worked with Jay Hartman at Untreed Reads on a couple of anthologies. The community is tight. We all share information.
2. Let's talk about the story. Where did the idea come from? Were you familiar with the folktale?


Once I heard about the challenge, I went looking for one I had never heard. The internet is an amazing tool. I searched 'rare Grimm tales' and there it was. Even had a really cool drawing of a young guy flying over some exotic city.


3. And it sparked your imagination?


You know the cliche about people who ask writers where they get their ideas from? I have no problem doing adaptations. When I was writing screenplays, I used to find stories and practice with turning them into movies. As soon as I read The Flying Trunk, everything started to come into place. I dig writing about Detroit. It's so foreign to so many people even here in Michigan. There is an event down by Wayne State University in the city called The Dally in the Alley. It's a party of hipsters, college students, and whoever else shows up. I saw some pictures a friend posted and everything kind of gelled from there.
4. What's been your favorite part of the experience?


Ken Bruen calling my story a gem in the foreward. Ken, if you read this, a beer on me at Bouchercon Cleveland.
5. What's next?


I've got projects all over the place but what I'm really hoping for is the opportunity to publish the old fashion way. I've always wanted to be a hack, a paperback writer. I'm kind of there. What do they call people who are prolific electronically?

And that Ken Bruen recommendation is thoroughly deserved.  Why not go and see if you agree with him?

Thanks Captain.
Posted by Nigel Bird at 13:04