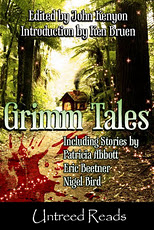 Things move quickly in this world of electronica.  New ways of selling and distributing and grabbing people's attention.  I guess we all need to pay attention to get to the good stuff and here's s little slice of that.
The Pablo D'Stair fiction challenge has taken off.  There has been a good deal of interest and for all those who entered, you'll be getting a new readership that your work deserves.  There's a podcast out there now, so you can hear the thoughts of Pablo in the hands of Rob and Livius over at Booked.
I you want some of the action and a chance to vote, the details can be found here.
MANHUNTER'S MOUNTAIN is the first full-length Cash Laramie novel by hardboiled veteran Wayne D. Dundee.  It's free for today, the last day of the offer, so you know you need to follow the link.  Don't you?
Here at Sea Minor, Loren Eaton is about to open your eyes to one or two things.  Loren has a story in the excellent Grimm Tales anthology and you'll find an offer on the book over at Untreed Reads.  If you buy the most excellent Discount Noir and Grimm Tales at the same time, you get 50% off Grimm tales.  I believe that means you can pick up both for $5.  You'll get a double dose of today's guest in the process.
Just an aside, Dirty Old Town (and other stories) is close to 1250 sales now after a mini-boom at Christmas.  Thanks for that.
You'll also be able to get a copy of 'With Love And Squalor' for free at Amazon tomorrow if I've done things right, so check it out if you're interested.
And now the main event.
Loren Eaton, you're very welcome here.
So, in preparing for this interview, I happened across your blog, I Saw Lightning Fall. You really like SF and fantasy and horror, all those really geeky genres. How did you end in the crime fiction anthology Grimm Tales?

True, speculative fiction really is my first love. I grew up reading it and naturally turned to writing it in later life. But several years ago I discovered Peter Rozovsky’s blog Detectives Beyond Borders and the crime writing of Patti Abbott. That influenced both my reading and writing habits.


And I suppose that a fairy-tale-themed crime-story collection didn’t fall too far off of your normal compositional mark, right?


Well, that’s true. When John Kenyon of Things I’d Rather Be Doing suggested it, I thought it sounded like a wonderful idea. Plus, it’s a lot of fun to be writing alongside fine folks such as Patti Abbott, Evan Lewis, Kaye George, Eric Beetner and Nigel Bird. You’ve heard of him, haven’t you?


Yes, I most certainly have. Let’s talk a little more about your story itself, shall we?


For Grimm Tales, You were supposed to riff off of one of the original Grimm’s fairy tales. Which one did you choose?


In truth, I didn't have much exposure to Grimm's fairy tales as a child. I knew some of the stories that Disney had reworked (sanitized, really), but I hadn’t read the originals. Around 2004 or 2005, I picked up a copy of the Ellen Datlow and Terri Windling-edited anthology Black Swan, White Raven, which featured reimagined folk stories. Michael Cadnum's "The Flounder's Kiss" really grabbed me. It retold “The Fisherman and His Wife,” a story about a henpecked husband who begs a magical fish for greater and greater blessings at the behest of his overbearing wife. With an almost noirish twist in the end, the woman’s greed and the man’s cowardice undo everything they’ve earned to that point. It was a natural choice for me.


And how exactly did you turn it into a crime story?


About the time I started writing it, my wife and I had just finished watching The Godfather for the first time. (I know, I know, I don’t understand how I made it that far in life without having seen Coppola’s masterpiece.) I wanted to feature a Mafioso as my protagonist and to riff off of that famous scene where Michael Corleone offs Sollozzo and McCluskey in an Italian restaurant. But I had to work in a flounder somehow. My father and I had done a little bit of fly fishing on the salt flats in the Keys, so I had my Mafioso head down there on vacation. True, the flounder population in south Florida is notoriously sparse, but I thought a bit of creative license would have to do.


Anything else for us? 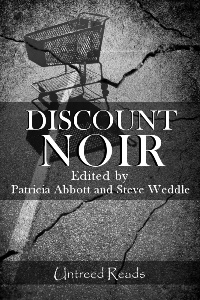 Yes! Go buy Grimm Tales, which is currently on sale in the Untreed Reads store. If you like it, pick up the cut-rate-retailer-themed anthology Discount Noir. It features my zombie love story “Thirty-One Hundred.”
Sea Minor - I'm glad I'm not the only one out there who arrives late to parties of cultural significance.  I'm only just half way through the first series of The Killing.  And I love it.
Posted by Nigel Bird at 10:08