Lists of best-reads may not be everyone's cup of tea, but I love them.  They provide a really useful guide for selections and advice from trusted hands.

You'll notice that I like making lists of my own.  I have to apologise for one glaring error (since corrected) in my ten short-story collections in my leaving out Mayhem by R Thomas Brown.  It's there now and I hope Mr Brown will understand.

A couple of weeks ago now, I read the top 5 reads of AJ Hayes.  In case you're not aware, AJ's become a good friend of mine - trusted critic, loyal supporter, adviser and one of my favourite writers of short fiction and poetry.

One of his picks had a really interesting cover and an intriguing title, 'Rampart and Toulouse'.  I knew I needed to contact the author of the novella, Kristin Fouquet, about getting her to do an interview for me.

Not only did she agree, but she has also sent me her book (not cheap to do across the pond) and it arrived yesterday.  I must say, it looks great and even has a lovely little bookmark in there, too.

There's a personal resonance for me in starting the year off with this.  Greg, close friend of many years and one who won't be with us in 2012 or any other year from now on, made New Orleans a second home.  He was out there for a year building homes and friendships and webs within the community and it's a book he would have loved just for that reason. As if that weren't enough, from what I can see in the photo, Kirstin is also the kind of lady he'd have loved to surf couches with.  I guess this is my way of turning a page with the gentlest of touches.

May I thank Kristin for her courtesy in communication, her kindness is agreeing to an interview and her generosity on sending me a book I can't wait to get to soon.

And here she is.

What is your dance of choice?
The tango. Shall we?
Let’s. What impact has the Internet made for you as a writer and a photographer?
I had some stories published by online publications (many now defunct) as far back as 2000, but it wasn’t until June of 2008, that things really escalated for me. My short story, “A Blonde for Onion,” was published by J.D. Finch at Outsider Writers. That site has evolved over the years, but it’s where I was first introduced to Caleb J. Ross, Lynn Alexander, Aleathia Drehmer, Tim Hall, Ken Wohlrob, David Blaine, Cheryl Townsend, Pat King, Beto Palaio, Jason Michel, Paul D. Brazill, among others. Forgive the name dropping, but I suppose I’m a bit sentimental about it. The most auspicious meeting occurred in one of the OW forums, where Carter Monroe wrote a comment about the Raymond Carver/Gordon Lish controversy. Being a longtime fan of Carver, I was now conflicted about how I viewed him as a writer. I approached Carter and a long conversation about writing and editing led to a writer/editor relationship and the publication of my first book, Twenty Stories by Rank Stranger Press. Many of the stories in the book were first published by online publications like Pindeldyboz, Full of Crow, The Ranfurly Review, Danse Macabre, Hobo Camp Review, Literary Fever, and The Bicycle Review. The three short stories which proceed the novella in my second book,   Rampart & Toulouse, were also published online in Muscle and Blood, Short Story America, and  Danse Macabre. I’ve also met so many terrific writers and friends online and am grateful for the connections. 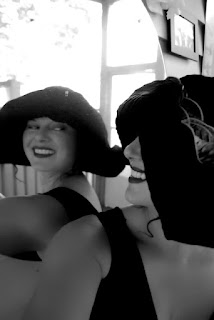 Although my photography has been used in many print publications, books, chapbooks, and music CDs, I have had my photographs and photo essays exhibited in over thirty online publications and galleries. In the fall of 2010, Richard Godwin generously granted me an interview about my photography in his online series Chin Wag at the Slaughterhouse. I’ve also made some short films and music videos which are on my Cinema page at my website Le Salon. The book trailer for Rampart & Toulouse is here.
Several reviews of your book, Rampart & Toulouse, mention the photographic influence on your writing. Which came first, the photography or the writing?
This is a difficult question to answer because so much of writing is thinking. Burton Rascoe wrote, “…a writer is working when he’s staring out of the window.” I think if you’re a writer, you were probably born a writer. I’ve been making up stories and dialogue in my head for as long as I can remember, but I didn’t start putting them down on paper until I could physically write at age five. Also as a child, I would tilt little mirrors around a room to see different angles, similar to cropping photographs. I think this innate interest in seeing the world from different perspectives attracted me to photography. My father gave me my first camera, a small Vivitar, before I took a trip in 1985. My first photographs were of Paris, but there are no pictures of me there because I didn’t trust anyone enough to use my camera.
You are a native of New Orleans. How much does your city play a part in your work?


She’s always there even if I choose not to show her, as in my more minimalistic stories or conceptual photographs. For better or for worse, I am a product of New Orleans and her culture. Many of the settings for my fiction and obviously my street photography reflect this city I love so much despite the challenges.
How dangerous is New Orleans and does crime seep into your writing?
Crime is a complex problem here. The homicide rate is frighteningly high with no solution in sight. While the majority of the murders occur with the victim and killer knowing one another, some innocent people meet unfortunate fates. There is witness intimidation, but most of the killings are the perpetuation of a vicious cycle of vendettas. I am not a crime writer, but my characters are sometimes affected by crime. In my novella, Rampart & Toulouse, the protagonist witnesses a drive-by shooting and becomes agoraphobic as a result.
Have the reviews of your second book been favorable?
I have been overwhelmed by the responses to Rampart & Toulouse (Rank Stranger Press, 2011).  Caleb J. Ross gave it a great review at Outsider Writers Collective and Press. Fellow New Orleans writers, David Lummis and Mark Folse, among others have bestowed kind words about it on Goodreads. James D. Wittenberg sounds off on Amazon. The lovely Penne J. Laubenthal calls my characters “Chekovian” in her article about me at Swampland.com. Ken Wohlrob ponders which came first- my photography or writing in his wonderful review, “Book of the Week: Rampart & Toulouse by Kristin Fouquet.” I was floored when A.J. Hayes not only gave it a fantastic review, but honored me by naming Rampart & Toulouse as one of his Top 5 Books of 2011 at the Guilty Conscience. I’m still dancing over that one.
So, what’s next?
I am writing my first novel. It’s titled Surreptitiously Yours. The setting is the French Quarter of New Orleans in the early 1960s. The protagonist is a 30 year-old film student working on her MFA in documentary filmmaking. Her thesis is a film using surreptitious recordings of people on the street, riding buses, etc… Then, she begins to suspect someone is spying on her. She’s uncertain if it’s real or if her increasing guilt about her surreptitious recording is causing paranoia. I’m also writing it in black and white.

Why write a historical novel instead of setting it in the present?


In short, because of technology. Surveillance equipment is common now. CCTVs are everywhere. The idea is they are intended to prevent or cut down on crime, but I don’t think they really do. Criminals know there are cameras in the businesses they rob. Many keep their backs to the camera or wear hoodies even in the heat of summer in order to remain anonymous. In some of the high crime areas of New Orleans, the cameras have been shot out or their lenses painted over and haven’t been replaced. With the majority of people carrying smart phones around with photo and video capabilities, anything can be recorded. I think people expect to be watched these days. I want to explore a time when there was a bit more privacy and people believed they were entitled to it.

What is the purpose of writing in B&W? Is it a gimmick?


My natural instinct in photography is to shoot in black and white. When I write, I see photographs. I see scenes and I describe them. With so many reviewers picking up on the photographic nature of my writing, it gave me the idea to write more like I photograph. I don’t think it’s a gimmick; I think it is a challenge in description. Everything in the novel is defined in dark and light, patterns and textures. I also think the psychological theme coupled with the era it’s written in is reminiscent of such stellar B&W films as Hitchcock’s “Psycho” (1960), Thompson’s “Cape Fear” (1962), and Fellini’s “8½” (1963) to name a few. Also, Powell’s “Peeping Tom” (1960), if only it had been shot in B&W.
I hope Surreptitiously Yours is never colorized.
I think it’s time to take off the Cuban heels. Any final thoughts?


Just when I thought I could dance all night. I would love to thank everyone who has been supportive of me and my writing and/or photography. I have a great feeling about 2012. I hope everyone has a wonderful new year. Finally, thank you so much for your time.

Nigel, many thanks for asking me to dance.