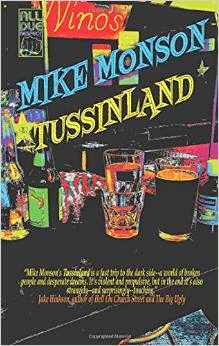 A quick mention from me that Southisders is still on offer until the end of the month. That's only a couple of days. It's still at 99p/99c if you're up for a little bit of Elvis, Home Alone and Blue Christmas.

And now to Tussinland. Either just buy it or read the review and then buy it. Here are my quickly scribbled thoughts.

‘I’m a crazy Bosnian rape orphan and I’m out of control.’ – Logan

Tussinland is Paul’s favourite place. It’s a world that’s created when he’s downed a bottle of his favourite expectorant, a rosy world of good feelings and happiness, or at least a break from the normal humdrum of his existence.

He’s not got a good deal going for him, but that doesn’t make him a bad man. This is extremely important to the book because, as the central character in a world where he’s surrounded by the devious and the broken, he’s someone it becomes impossible not to root for.
Paul’s problems are many. He has to live at home with his promiscuous mother for a start. He’s lost his family and his teaching job. He’s overweight, is addicted to sugary cereal (which he eats by the packet) and has more friends on the TV than anywhere else. These are only minor issues when compared to the main one, namely that he’s the chief suspect in the investigation into the murder of his ex-wife and her new partner.

The thing is, the reader knows that he’s innocent from the off. We see it happen at the beginning, Paul’s niece, Miranda, and her boyfriend, Logan, film the killing and then run away with an enormous stash of heroin.

Paul is then painted into a corner. As well as the police, the man who needs to get his hands on the drugs is after him as are his Christian fundamentalist relatives who need the cash.
This isn’t just any old story about troubled people who live difficult lives, it’s a very well-written and thrilling adventure where the twists and turns make for a very emotional and ejoyable ride.

What I liked most about this novel is the way the characters were developed along the way. They grow into fully drawn people and while it happened my sympathies had to adjust. It’s something that’s hard to pull off and also gives the novel a hugely satisfying depth.

There are a lot of great reviews out there for this book and it’s been extremely well-received. I was a little worried that it would let me down.

I needn’t have worried. It certainly lives up to its growing reputation and I’d recommend it to anyone who likes to be entertained while they read their crime fiction.

A small word of warning, this one’s very specific and graphic at points. If you’re easily offended, this may not be for you.