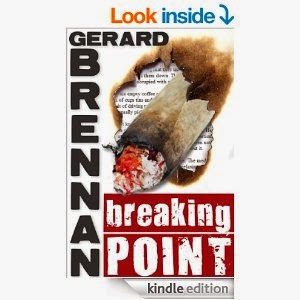 In Breaking Point, Brian is struggling to come to terms with his brother’s death. His girlfriend is pregnant and is unsure about him as a father. The local dope dealer spends too much time smoking his own gear and hopes that his dreams of opening a Kung Fu school will help him pay of his debts to his supplier. Owen is just a bitter man seeking revenge for the ear Brian shot off.

These ingredients are perfect to create a romp in a quiet Northern Irish village. Each element of the story collides with the other to provide a novella with bags of dangerous energy.

Gerard Brennan handles his players really well and his plotting-foot is always hard down on the accelerator as he drives the story forward. The inevitable violence is brutal and graphic when it happens. It also carries some rather unusual elements that only a slightly twisted mind could create.

Above all, I enjoyed the humour of Brennan’s novella. He uses a lot of comedy and it percolates through character, conversation and situation. It’s an addition to the punchy story that adds a lot to its entertainment factor.

This one’s perfect for shaking up one’s reading diet and adding some fun to life.

It is a sequel, but you really don’t need to read the prequel [The Point] first. I would, however, urge you to do so at some point as I feel it’s a slightly stronger piece.

The Point novellas are great reads and I’ll definitely be going back for more if there’s a further addition.
Posted by Nigel Bird at 12:35