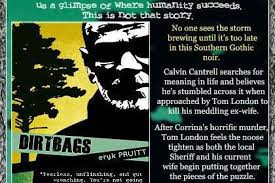 A big day here at the Birdhouse. My novel SOUTHSIDERS has just been released by the wonderful Blasted Heath. If you’re at all interested, why not pop on over and take a look? I’ll write a little more about the book over the next few days, no doubt.

Now to my latest read, Dirtbags by Eryk Pruitt.

“It’s no wonder her husband had a heart attack. If I was married to her, I’d eat nothing but butter and pray the good Lord made it nice and quick.”

Tom London owns the biggest restaurant in Lake Castor. He’s married to an influential woman and dotes on his son (in his own particular way). The only fly in his ointment is an ex-wife who wants to get her child back. She’s a problem who needs dealing with.

Jack hires Calvin to kill his ex. He hands over a wad of cash (slightly short, of course) and Calvin sets of on to take the first steps of a journey he’s always wanted to take.

His secret desire is to become a serial killer. He’s studied the methods and histories of all of the big names in the field and wants to join them. It will give him a role in life and will bring him the notoriety he’s been craving all these years.

To help him along, Calvin decides to take on a sidekick, Phillip Krandall. Krandall’s big regret in life is that he didn’t carry out a killing spree at his high school on the day he took his bag full of weapons into class. The only reason he didn’t do it was that Calvin intervened. When Calvin calls at Krandall’s trailer, there’s only ever going to be one outcome and the pair set off to Texas to do eliminate Jack London’s ex.
What follows is for you to find out.

I can tell you that Jack’s ex-wife isn’t the failure she’s been described as and that things don’t go as the would-be killers intend. You’ll have to read it for yourself to find out how it plays out and I’m pretty sure it won’t be the way you expect.

The book’s divided into three sections. The first focuses on Calvin, the second on Jack and the third on Calvin’s wife, Rhonda. This allows the story to develop in different ways. There are back-stories to enjoy, there are the foundations to the plot and there is the narrative thread of our new serial-killer. All the way through, the settings are well-described and there’s a strong desire to discover how things will eventually play out. It’s dark and sleazy, but it’s also very entertaining. There’s a subtle humour about the situation and the characters and a decent comic edge to the dialogue.

To my mind, it’s the opening section that works the best. Getting to know Cantrell and the surrounding cast of characters is a real treat and it’s here where I felt the dramatic tension worked best. Pruitt does a great job of nailing things down, all the time avoiding the obvious. Just when I thought I knew where I was going, the plot would twist or turn in a new direction and give me something else to ponder. The other aspect of the opening which I think worked well was the way it was possible to find room to root for some of those involved, even though they’re a dismal collection of specimens – for me, that became less easy as the story played out.

It’s surprising that this is a debut novel given the quality of the work. Pruitt is definitely one to watch and I’ll be keeping a look out for his work in the future, not that I’d ever like to turn my back on the guy (just in case).
Posted by Nigel Bird at 10:48