One Man's Opinion: PARTNERS IN CRIME by STUART MACBRIDE 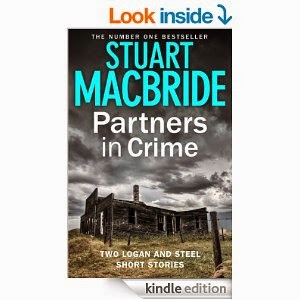 We had a two minute silence in school yesterday. Unfortunately, when it started I was in the middle of a timed dyslexia assessment and had to let it run. We still managed a little silence, though, especially because our bells ended up being five minutes apart.

When I got home after a long evening of meeting parents, I needed something to help me unwind. Spurred on by my moments of reflection, I found something entitled The Somme In Seven Poems.
It’s a really powerful cocktail of wonderful poetry and beautiful animation that is well worth a visit. It only lasts about ten minutes and if you have access to BBC’s iPlayer, I’d urge you to go along.
The poets demonstrate one of the wonders of the form, the ability to generate huge emotion and energy in a very short space of time.

On a tangent, I’d recently been flicking through my Kindle and stumbled upon a book by Stuart MacBride called Partners In Crime: Two Logan And Steel Stories (Bad Heir Day and Stramash). It may be a mouthful of a title, but MacBride shows off his own skills when working within a short space to tell a couple of fantastic stories.

The first is set over Christmas. It involves a fishy missing person case. When links to a local loan-shark are established, it appears that there’s every chance that a murder’s been committed. To make matters worse, Steel has been left a huge amount of money by a criminal she loathes on the condition that she swallows her pride and delivers a glowing eulogy at the funeral service. It’s moody, dark and wickedly funny. It’s also attention-grabbing as an investigation.

The second deals with a gathering of criminal minds on the Island of Jura. Some of the criminals are even supposed to be dead. DI Steel has happened upon them while over there with her girlfriend and Steel’s keen to keep the surveillance a secret from her partner to avoid trouble. To help her she calls upon Logan McRae and he’s anything but happy to arrive on the island in the middle of a patch of miserable weather. It turns out that Steel has stumbled upon a shipwreck with a cargo of heroin and the criminals have gathered to recover it and go their separate ways. It begins with a moody tension, cracks on with a heavy dose of wit and ends in a climax in which MacBride throws in practically everything bar the proverbial kitchen sink. It’s a very entertaining piece.

All in all, this is a very satisfying read that will brighten any day.

As a bonus, there’s a preview of a novel at the back. As far as I was concerned, I’d read enough to know that I’ll be back for more sometime soon.
Posted by Nigel Bird at 11:13