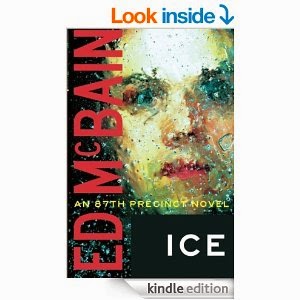 “Carella had learned early on in the game that if you wanted to survive as a cop, you either took nothing at all or you took everything that wasn’t nailed down. Accept a cup of coffee on the arm from the guy who ran the local diner? Fine. Then also take a bribe from the neighbourhood fence who was running a tag sale on stolen goods every Sunday morning. A slightly dishonest cop was the same thing as a slightly pregnant woman.”

I came across a copy of Ice by Ed McBain on the table of books being sold off by my library. The name’s familiar and the cover interesting, so I figured it was a chance worth taking. I didn’t pay much and the book was worth that at least.

I’m in two minds about it. There are some wonderful aspects to the novel and there are some unappealing ones, too.

It opens strongly with the murder of a young dancer as she returns home in the snow. The key to the killing in terms of the investigation is that the weapon was also used in the shooting of a small-time drugs dealer named Paco Lopez.

There’s a leap from here into a police station, the 87th Precinct. There’s a heavily pregnant prostitute, a cell full of vocal drunks and a cast of police officers as long as the law’s arm. I thought immediately of Hill Street Blues in terms of the feel of the station. What is much more difficult to settle into on the page as opposed to on the screen is the chopping and changing from one place to another. McBain flicks between one point-of-view to another without warning. I found that to be disconcerting and it had me re-reading at several points to catch the change.

This shifting from one head to another carries on throughout the book. I did get used to it, but never really was entirely convinced by the style. It’s not a matter of weaving together separate strands of a story, but it’s more of a scatter-gun approach.

There are also big changes of pace to cope with. The case of the murders itself is totally engaging, the back-stories and tangents often less so.

Throw in a heavy line in dialogue tags and there's a lot to block the arteries of this one.

In contrast to that, there are some big pluses. The characters of the main detectives are well drawn, particularly that of Carella.

There are also some great crooks. Brother Anthony and the razor slashing Emma are rather special and might well be right up there in the all-time-baddies Hall Of Fame.

Throw in some great lines and a pretty engaging investigation and, in the end, I’m glad I passed that library table.

I enjoyed my visit to the 87th Precinct and I’m sure I’ll go there again, only not in any great hurry.
Posted by Nigel Bird at 22:28