One Man's Opinion: OF BLONDES AND BULLETS by MICHAEL YOUNG 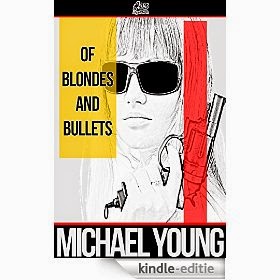 A new publisher really needs to hit the ground running with their first book. With Of Blondes And Bullets by Michael Young, Number Thirteen Press certainly manage that. So does the central character as it happens, mainly because he’s running for his life.

The novella opens in a locked room. There’s been a lot of violence and pain. Those inside are desperate to get out before their captor returns.

“Just for the hell of it, knowing that it was hopeless and that nothing was going to give, but just for the hell of it anyway, the big man tried one last time. He threw his shoulder against the heavy iron door, putting as much weight into it as his injuries would allow.”

They need to get out and will risk everything to do so, only there’s no key and there are no windows. The desperation is palpable, the climax chilling.

We switch then to another scene. A man (Frank) on a beach spots a flash in the sea. Recognising it as human being, he dives in without a thought and brings them in. It’s a woman. A beautiful and dangerous woman called Kathy.  He takes her home to his girlfriend’s place – she’s away working, so anything goes. Kathy showers and gets dressed and brings a whole new energy into Frank’s flat and dull existence. Seeing her wrapped in a towel seems to show him exactly what he’s missing from his life. Kathy insists she needs to get to an address across town. With nothing better to do (“For the first time in an age, he knew that he would do something.”) Frank takes her there. Shortly afterwards, Frank encounters a gang of heavyweight thugs who clearly want to take Kathy from him. Frank manages to give them the slip and heads for home once again. Kathy runs and Frank does the first sensible thing of the day and calls the police to report what has happened.

If only that were the end of it.

Frank’s life is about to be turned upside down.

The heavies are back. They want Kathy. Frank’s battered to within an inch of his life before he can tell them that he doesn’t even know the woman. Not that it really matters. These guys aren’t the kind to believe anything that isn’t backed up by money or force.

Frank’s problems turn from bad to worse as he fights against all the odds to keep himself alive and to find out what’s going on.

What follows is an adrenaline-fuelled tale in which nothing can be taken for granted.

It’s a chase within a chase. The action is breathless and the violence brutal. There are guns and knives and fists galore. It’s not clear who’ll be coming out of things alive until the final words and this keeps the tension high till the end.

I don’t think it’s without flaws. I lost my way a couple of times and wanted a smoother momentum in places, but I thoroughly enjoyed it nevertheless. It’s edgy and disconcerting. There’s a sense of being in another time and place and yet of also being in familiar territory. It’s good, old-fashioned noir presented in a fresh way.

I’d judge this book by its cover if I were you. It speaks volumes about what lies within. I suggest you step inside and find out for yourself if you think you’ve got what it takes.

A very strong start to what promises to be a very exciting enterprise.
Posted by Nigel Bird at 22:18