One Man's Opinion: THE WOMAN CHASER by CHARLES WILLEFORD 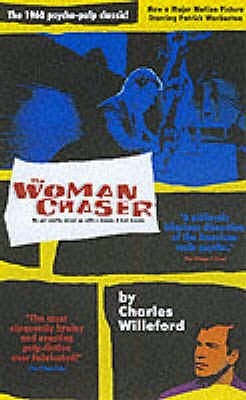 “This is what I learned about a story at Mammoth Studios: A likeable and sympathetic hero, one who affords a good measure of viewer-identification, and around whom the story revolves, is faced with the necessity of solving a serious and urgent problem which affects his vital interests. The hero makes an effort to solve his problem, but this only succeeds in making matters worse. (This is me all right). The hero’s efforts all lead to a series of increasingly harder complications. Each new complication is related to the original problem. (This isn’t me, or is it?) Anyway, there is an integrated series of complications which build up in intensity until a definite point or crisis is reached. It is here that the reader cannot possibly understand how the hero can possibly succeed. But now the hero makes one last and heroic attempt to resolve his difficulties, and in every case it must be his own individual efforts that solve the dilemma (s). Under no circumstances can he accept any form of outside aid to make things easier for him.”

It’s a long quote, I know, but a great dissection of a type of story-writing. This comes from the narrator of our story, a successful car salesman called Richard Hudson.

The opening has Hudson watching a used Los Angeles car lot that he intends to buy. He analyses the pros and cons of the place with ruthless application and proceeds with his purchase for the business. It’s a classy, beautifully written beginning that really sucked me in completely. Like the quote above says, we have our sympathetic hero with whom we can identify.

From there, we’re transported into an analysis of the art of story-telling in the film world. It’s a little unsettling, but it’s not long before the thread of the narrative is resumed.
Essentially we have a tale being told in flashback. It’s a great way of grabbing attention and sows the seeds of tension because we know we’re heading for some kind of fall.

Hudson moves back in with his eccentric mother and family. He spends a lot of time with his step-father, a genius of cinema who has lost his way. As they hang around together, Hudson realises that he needs something to fill the emptiness of his life and the creation of a film seems to be the obvious thing for him to do. He has an amazing knowledge of cinema and his step-father allows him an insight that many script-writers might die for.

The creation of the film and the obsession of the writer are gripping. There are many occasions when I wanted to leap in and offer advice - after all, I know already that things aren’t set to end well.
A huge amount of the book is absolutely brilliant.

What lets it down a little is Hudson’s determination to do things his own way. He wants to do something that is out of the ordinary and he can’t bear the interference of the man at the top who wants control of the piece. His obsession turns into a kind of madness and in this madness lies his downfall. The problem for me here is that the book also works to its own calamity of an ending and for me Hudson had become so despicable that I didn’t care a hoot for him anymore. He was no longer my slightly flawed hero, but had turned himself into the villain of the piece. While I’m sure that was deliberate, there was something about it that felt a little disappointing. Maybe if I’d realised earlier what a toe-rag the man was (and there were plenty of serious clues, believe me), I might have read in a different way.

Willeford certainly tells an incredible story with great flair and skill. The voice and the whole situation are brilliantly done. Because of that, I’m slightly disappointed in myself for not loving the entirety of the book to pieces. This one’s definitely worth a read and I’m sure will ignite a whole batch of questions for you as a reader.

I’d love to hear a few opinions on this. Please feel free to share.
Posted by Nigel Bird at 11:44